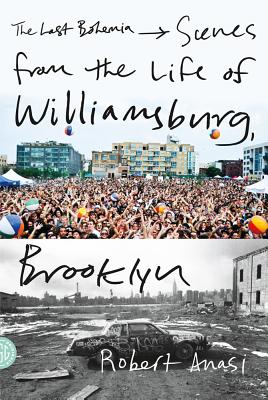 Scenes from the Life of Williamsburg, Brooklyn

A firsthand account of the swift transformation of Williamsburg, from factory backwater to artists' district to trendy hub and high-rise colony

Williamsburg, Brooklyn, is now so synonymous with hipster culture and the very idea of urban revitalization—so well-known from Chicago to Cambodia as the playground for the game of ironized status-seeking and lifestyle one-upmanship—that it's easy to forget how just a few years ago it was a very different neighborhood: a spread of factories, mean streets and ratty apartments that the rest of New York City feared and everyone but artists with nowhere else to go left alone.
Robert Anasi hasn't forgotten. He moved to a $300-a-month apartment in Williamsburg in 1994, and watched as the area went through a series of surreal transformations: the warehouses became lofts, secret cocaine bars became sylized absinthe parlors, barrooms became stage sets for inde-rock careers and rents rose and rose—until the local artists found that their ideal of personal creativity had served the aims of global commerce, and that their neighborhood now belonged to someone else.
Tight, passionate, and provocative, The Last Bohemia is at once a celebration of the fever dream of bohemia, a lament for what Williamsburg has become and a cautionary tale about the lurching transformations of city neighborhoods throughout the United States.


Praise For The Last Bohemia: Scenes from the Life of Williamsburg, Brooklyn…

"His clear-eyed, heartfelt elegy shows why a Williamsburg—free, fecund, gloriously threadbare—is so vital to the culture."—Publishers Weekly

"With a fine ear for dialogue and a nonjudgmental eye, Anasi conjures the pre-9/11 atmosphere of the place, in which the beer flowed like water and there was always a place to crash after a night of pub crawling. An impressive bit of literary journalism and a sympathetic look at a vanished era."—Kirkus Reviews

Robert Anasi is the author of The Gloves: A Boxing Chronicle (North Point Press, 2002). His work has appeared in many publications, including The New York Times, The Times Literary Supplement, The Virginia Quarterly Review, The New York Observer, Salon, and Publishers Weekly. He teaches literary journalism at the University of California, Irvine, where he is a Schaeffer and Chancellor’s Club fellow. He is also a founding editor of the literary journal Entasis.