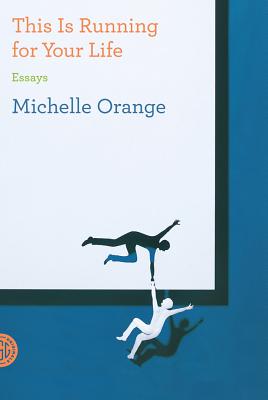 This Is Running for Your Life

In This Is Running for Your Life, Michelle Orange takes us from Beirut to Hawaii to her grandmother's retirement home in Canada in her quest to understand how people behave in a world increasingly mediated—for better and for worse—by images and interactivity. Orange's essays range from the critical to the journalistic to the deeply personal; she seamlessly combines stories from her own life with incisive analysis as she explores everything from the intimacies we develop with celebrities and movie characters to the troubled creation of the most recent edition of the Diagnostic and Statistical Manual of Mental Disorders.
With the insight of a young Joan Didion and the empathy of a John Jeremiah Sullivan, Orange dives into popular culture and the status quo and emerges with a persuasive and provocative book about how we live now. Her singular voice will resonate for years to come.


Praise For This Is Running for Your Life: Essays…

A New Yorker Best Book of 2013A Flavorwire Best Nonfiction Book of 2013A Largehearted Boy Best Nonfiction Book of 2013"[A] well-assembled essay book can be as charismatic as a new rock album, especially if it introduces you to a youngish author whose work you’d previously missed. This was the case, for me, with Michelle Orange’s first collection: an assembly of ten stylish, rangy, slightly weird essays that cover topics from the city of Beirut to digital photography. Orange’s style is at once narrowly personal and intellectually ambitious, and offered more surprises than I’d expected." —Nathan Heller, NewYorker.com"Considering the remarkably strong voice — one that’s sardonic enough to laugh at the darkness just a bit — and sharp mind Orange brings to This Is Running for Your Life, you might assume that the author is an old hand at this sort of thing, with plenty of essay collections to her name. In fact, this is her first. Especially in a year when so many writers were trying to say "Goodbye to All That," Michelle Orange was more subtly earning her place as of one of Joan Didion’s heirs. All we can do is sit back and hope she keeps running with it." —Jason Diamond, Flavorwire

“What a marvelous—really, a marvel—journalist and thinker Michelle Orange is. I am so engrossed in these culturally astute essays about everything from Canadian retirement homes to Manic Pixie Dream Girls.” —Sloane Crosley, NPR.org

“A brave, new, and sometimes thrillingly difficult collection of essays . . . [This Is Running for Your Life] jolted me sideways with ideas that were both immediately accessible and weirdly deep . . . [It’s] it’s a joy to come across someone who has so much to say and who says it with such force and originality. From persistence of vision to persistence of image, Orange embraces such a wide range of concerns that while reading This is Running for Your Life I had the feeling I had when I was in university: that there is more to the world than I thought, and that it was worth the time to pause and consider it.” —Michael Redhill, The National Post

“There’s a wonderful balance between high and low art in this book, and a terrific streak of irreverence . . . In [one] stand out piece Orange recalls her time in Honolulu at the 2011 conference of the American Psychiatric Association—a hilarious and fascinating essay that approaches David Foster Wallace at his best . . . Orange tackles disparate elements with ease, and her essay col lection is smart, funny and fiercely original.” —Carmela Ciuraru, San Francisco Chronicle

“The book’s diverse subject matter is unified by [Orange’s] keen critical eye, acerbic sense of humor, and a writing style that crackles with wit and insight. Each piece braids multiple narrative and thematic threads to create almost an impressionistic interpretation of how we experience, negotiate and document the times in which we live.” —Pasha Malla, The Believer

“Michelle Orange has made a name for herself as a social and aesthetic observer who eschews bromides and empty sentiment. Droll, honest, and incisive, her writing glides effortlessly between artistic criticism and per sonal anecdote.” —Harper’s

“This essay collection cuts through cultural preconceptions and offers insight into our changing world with clarity, intelligence, and a truly original voice.” —Largehearted Boy

“A brilliant collection of essays on modern life, and ways that technology and connectivity are changing how we interact with the world . . . The title of a new collection of essays from critic Michelle Orange, This Is Running For Your Life, is so striking in part because it is such an unspoken but recognizable feeling about the way we currently spend our time on earth. As Orange brilliantly breaks down the state of modern life and how it stands in relation to technology and the commoditized image, she tells us much of what we already have intuited, but might have been afraid to admit to ourselves . . . This book is not only a comprehensive cultural portrait of our relationship with technology but also time itself, in the changing ways that we mediate it and consume it.” —Nicholas Mancusi, The Daily Beast

“The great fun of Michelle Orange’s This Is Running for Your Life is in watching an essayist build associations between seemingly unconnected topics—James Dean and Michael Jackson, air travel and old age, Hawaii and DSM-5—with all the ease and agility of a master craftsman . . . it would it would be difficult to name another cultural critic who brings such a high level of intellectual rigor to her subject. Her essays are funny, but not frivolous; sharp, but not brittle. This Is Running for Your Life is thoughtful, heartfelt, witty and deeply impressive . . . In Orange’s writing, the individual gives way to the art (and vice versa), each illuminating the other . . . An abiding intelligence guides readers through the pages, and it’s gratifying to encounter a writer with such a strong ability to balance the personal and the critical . . . It’s a good book for readers who like to think as they read, and an excellent corrective for those of us who may have fallen out of the habit.” —S. J. Culver, Minneapolis Star-Tribune

“With its stew of high and low cul­tural ref­er­ences and extremely con­fi­dent voice, Orange’s essay col­lec­tion This is Run­ning for your Life dis­plays a crack­ling brain choos­ing to turn its atten­tion to an array of top­ics and ideas.” —Meg Wolitzer, NPR.org

“Orange offers glimpses of the emo­tional root struc­ture of her own asso­cia­tive ten­den­cies, demon­strat­ing how exca­vat­ing analo­gies every­where is a form of gen­eros­ity but also a symp­tom of hunger: for sense, for con­nec­tion, for accumulation . . . At the cen­ter of her book is a stub­born fas­ci­na­tion with how imper­fectly we know one another and our own col­lec­tive past. But there is a deep ten­der­ness in how she picks apart our imperfection—a beat­ing heart deliv­er­ing oxy­gen to her acro­batic intellect—and it’s this qual­ity of intel­li­gent ten­der­ness that con­nects her voice most pal­pa­bly to [that of Rebecca Sol­nit].” —Leslie Jamison, The New Republic

“It is not an exag­ger­a­tion to say that Orange has per­fected the art of the per­sonal essay, seam­lessly weav­ing her own his­tory with our col­lec­tive expe­ri­ence, and effort­lessly ref­er­enc­ing dra­mas both small and large to back up her points. In these 10 diverse pieces, she ele­gantly com­bines his­tor­i­cal, pop-cultural, and per­sonal ele­ments, tak­ing read­ers on well-researched, acces­si­ble jour­neys through feel­ings and facts.” —Stacey May Fowles, Quill and Quire (starred review)

"In the opening essay in this engrossing collection, a book that restores one’s hope for the future of intelligent life on earth, Orange introduces 'the theory of receptivity,' a phrase that neatly describes the source of her fathoming inquiries. In this extended thought piece, written, as is every selection, with an ensnaring mix of intense curiosity, personal disclosures, buoyant wit, and harpooning precision, Orange considers the ways technology has altered time and asks why nostalgia is 'now such an integral part of American culture.' Film critic, journalist, and writer Orange’s great passion, and her inquiry into permutations of the cinematic 'dream girl,' from Marilyn Monroe to today’s 'approachably edgy, adorably frantic,' but damaged pixies, unveils crucial aspects of our 'collective imagination.' Incisive analysis of the impact of social media is matched by a poignant dispatch on her nervy 2008 sojourn in Beirut and a startlingly profound report on what was actually at stake at an American Psychiatric Association conference. Orange’s receptivity is acute, her mastery of language thrilling, and her interpretations of the forces transforming our lives invigorating." —Donna Seaman, Booklist

“The energy, vari­ety and intel­lec­tu­al­ity of these expan­sive non-fiction pieces recall the plea­sures of short sto­ries. Dis­parate sub­jects (a solo vaca­tion in Beirut, a visit to her grandmother’s retire­ment home, Melville Heights in Hal­i­fax) delight like restau­rant sam­pler plat­ters; the reader is served a curated mix of small delights, items one may not nor­mally select, per­haps out of fear of dis­ap­point­ment or a lack of adven­tur­ous­ness . . . This is writ­ing for your life. You won’t read a bet­ter col­lec­tion of essays this year.” —Megan Power, Hal­i­fax Chron­i­cle Herald

“In this whip-smart, achingly funny collection, film critic Orange (The Sicily Papers) trains her lens on aging, self-image, and the ascendancy of the marketing demographic, among other puzzles of the Facebook generation . . . [this is] a collection whose voice feels at once fresh and inevitable.” —Publishers Weekly

“Michelle Orange is a crystal clear thinker—funny, lucid, warm and enthusiastic. And This Is Running For Your Life is an important treasure trove of irresistible ideas, information and memories. I found it a delight.” —Jami Attenberg, author of The Middlesteins

“Reading Michelle Orange is like getting swept up in a long, stimulating conversation. Orange is fearlessly brainy and forthcoming, and she unstitches cultural assumptions with dexterity and wit. This Is Running for Your Life is a collection of argument, observation, and personal revelation that left me thoughtful and entertained.” —Leanne Shapton, author of Swimming Studies

“Smart, sophisticated, and quirky, these essays showcase an original voice that uncannily captures the broodings and shadings of a generation.” —Philip Lopate

“A sprawling, maximalist journey into the existential and cultural dramas of late twentieth-/early twenty-first-century North American life. Michelle Orange gives us the contents of her very interesting mind along with a healthy dose of her very good soul.” —Meghan Daum, author of My Misspent Youth and Life Would Be Perfect If I Lived In That House

“With profound clarity and sly, pointed humor, Michelle Orange peels back the skin of our modern world. I love this damn book!” — Davy Rothbart, author of My Heart Is an Idiot

“I haven’t read anyone who writes more incisively and provocatively about the way we live now than Michelle Orange. She’s a master essayist and our very best modern critic.” —Stephen Elliott, author of The Adderall Diaries

Michelle Orange is the author of The Sicily Papers and the editor of From the Notebook: The Unwritten Stories of F. Scott Fitzgerald. Her fiction, essays, criticism, and journalism have appeared in The New York Times, The Nation, The Virginia Quarterly, The Village Voice, The Globe and Mail, Movieline.com, and McSweeney’s, among other publications. She is a founding contributing editor of The Rumpus.
Loading...
or support indie stores by buying on