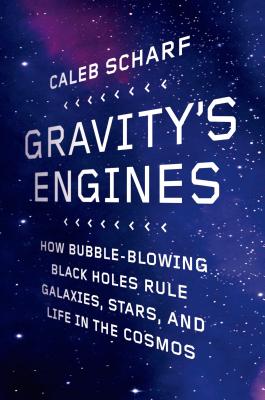 How Bubble-Blowing Black Holes Rule Galaxies, Stars, and Life in the Cosmos

One of The Barnes and Noble Review Editors' Picks: Best Nonfiction of 2012

We've long understood black holes to be the points at which the universe as we know it comes to an end. Often billions of times more massive than the Sun, they lurk in the inner sanctum of almost every galaxy of stars in the universe. They're mysterious chasms so destructive and unforgiving that not even light can escape their deadly wrath.

Recent research, however, has led to a cascade of new discoveries that have revealed an entirely different side to black holes. As the astrophysicist Caleb Scharf reveals in Gravity's Engines, these chasms in space-time don't just vacuum up everything that comes near them; they also spit out huge beams and clouds of matter. Black holes blow bubbles.

With clarity and keen intellect, Scharf masterfully explains how these bubbles profoundly rearrange the cosmos around them. Engaging with our deepest questions about the universe, he takes us on an intimate journey through the endlessly colorful place we call our galaxy and reminds us that the Milky Way sits in a special place in the cosmic zoo—a "sweet spot" of properties. Is it coincidental that we find ourselves here at this place and time? Could there be a deeper connection between the nature of black holes and their role in the universe and the phenomenon of life? We are, after all, made of the stuff of stars.


Praise For Gravity's Engines: How Bubble-Blowing Black Holes Rule Galaxies, Stars, and Life in the Cosmos…

“Paperback Pick of the Week” —The Guardian

“Scharf makes vivid the mind-boggling nature of the universe . . . [there are] bright beams of knowledge coming from this excellent book.” —Wall Street Journal

“This is a book that is rich in the poetry of scientific language . . . [N]ot only does [Scharf] know more about the universe than you or I do, he knows how to transmit his knowledge by deft use of analogy.” —The Guardian

“To call this an absorbing read is an understatement. I felt dreamily transplanted . . . When I did emerge from the book to look up at the summer stars, the night seemed more brightly lit, slightly more known but also more awesome, more wonderfully strange.” —The Barnes & Noble Review

“With Gravity's Engines, Caleb Scharf establishes himself as one of the finest space storytellers.” —The Christian Science Monitor

“Using rich language and a brilliant command of metaphor, [Scharf] takes on some of the most intricate topics in theoretical and observational astronomical research. He weaves a wonderfully detailed tapestry of what modern astronomy is all about, from the complexities of cosmic microwave background studies to the X-ray mapping of galaxy clusters.” —Nature

“[H]eady stuff, but luckily for readers . . . who lack a deep understanding of cosmology, Scharf populates his book with images and colorful metaphors.” —The Chronicle of Higher Education

“[A]n excellent overview of the state of black hole research . . . to explain why black holes are so important, Scharf provides a tour of much of modern astronomy and cosmology along with some requisite history, an impressive feat for such a relatively short book.” —Ars Technica

“The subtitle of this most readable book about supermassive black holes exemplifies Scharf's playful tone...Highly recommended. Teen and adult fans of astronomy, as well as scientists looking for ways to explain black holes to nonscientists, will all enjoy this text.” —Library Journal (starred review)

“Scharf's explanations are vivid and accessible, evoking the awe of cosmic grandeur in a way that's as humbling as it is fascinating.” —Publishers Weekly (starred review)

“Scharf is a writer you'll gladly follow to the end of the universe.” —Zocalo Public Square

“[S]tunning. I can't remember when I last read a popular science book where I learned as much I hadn't come across before.” —Popular Science Book Review (five stars)

“In Gravity's Engines, Caleb Scharf deftly tells you all you wanted to know about Black Holes, as well as all you never knew you wanted to know. By the end of the book your conclusion will surely match mine: Black holes are terrifying yet awesome constituents of the cosmos.” —Neil deGrasse Tyson, Director of the Hayden Planetarium at the American Museum of Natural History, author of Space Chronicles and Death by Black Hole

“Superbly accessible . . . Scharf's breathtaking cosmic vision will appeal to anyone whose curiosity is aroused by gazing at a star-filled sky.” —Booklist

“An intelligent explanation of a weird but essential feature of the universe . . . rich, satisfying.” —Kirkus

“Scharf provides a virtuosic history of the universe . . . he also serves as an appealing tour guide to the eerie, infinite corridors of the cosmos in which we reside.” —Prospect (UK)

Caleb Scharf is the director of the Columbia Astrobiology Center. He writes the Life, Unbounded blog for Scientific American; has written for New Scientist, Science, and Nature, among other publications; and has served as a consultant for the Discovery Channel, the Science Channel, The New York Times, and more. Scharf has served as a keynote speaker for the American Museum of Natural History and the Rubin Museum of Art, and is the author of Extrasolar Planets and Astrobiology, winner of the 2011 Chambliss Astronomical Writing Award from the American Astronomical Society. He lives in New York City with his wife and two daughters.
Loading...
or support indie stores by buying on