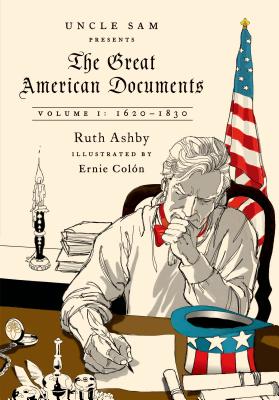 In the Great American Documents series, the teacher and graphic-book author Ruth Ashby and the renowned illustrator Ernie Colón tell the story of the United States through the major speeches, laws, proclamations, court decisions, and essays that shaped it.

The Great American Documents: Volume 1 introduces as series narrator none other than Uncle Sam, who walks us through twenty essential documents bookended by the Mayflower Compact in 1620 and the Indian Removal Act in 1830. Each document gets a chapter, in which Uncle Sam explains its key passages, its origins, how it came to be written, and its impact. In the chapter "The Maryland Toleration Act," we learn that this document was one of the first blueprints for modern religious tolerance. "Common Sense" depicts the Boston Tea Party and the British response as the prelude to Paine's stirring pamphlet. And "The Louisiana Purchase" closes with Lewis and Clark setting off to map Jefferson's "empire of liberty."

As Ashby and Colón show, the creation of that empire resulted in immense prosperity but also meant the extension of slavery and the forcible removal of the Native Americans. Their balanced and teachable theme is that these twenty documents reveal our early struggles to live up to the principles of liberty and equality. This graphic primer is an indispensable resource for students and anyone else who wants the facts of American history close at hand.

Ruth Ashby is the author of more than thirty books for children and young adults, including Anne Frank: Young Diarist and Rosa Parks: Courageous Citizen. A former book editor, she teaches English at the Portledge School in Locust Valley, New York.

Ernie Colón is the illustrator of the New York Times bestseller The 9/11 Report: A Graphic Adaptation, After 9/11, Che, and Anne Frank (all published by Hill and Wang). He has worked at Marvel, where he oversaw the production of Spider-Man, and at DC Comics, where he did the same for Green Lantern, Wonder Woman, Blackhawk, and the Flash.

“Colón's illustrations help greatly in clarifying concepts and adding dashes of drama and humor . . . An effective and engaging introduction to some of the key documents that shaped our nation.” —Library Journal

“The cartoon approach helps refresh history and make it come alive. A good primer for students and a refresher course for their parents.” —Kirkus Reviews