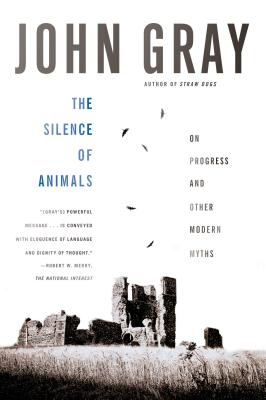 The Silence of Animals (Paperback)

On Progress and Other Modern Myths

A searching, captivating look at the persistence of myth in our modern world

"By nature volatile and discordant, the human animal looks to silence for relief from being itself while other creatures enjoy silence as their birthright."

In a book by turns chilling and beautiful, John Gray continues the thinking that made his Straw Dogs such a cult classic.
Gray draws on an extraordinary array of memoirs, poems, fiction, and philosophy to re-imagine our place in the world. Writers as varied as Ballard, Borges, Conrad, and Freud have been mesmerized by forms of human extremity—experiences that are on the outer edge of the possible or that tip into fantasy and myth. What happens to us when we starve, when we fight, when we are imprisoned? And how do our imaginations leap into worlds way beyond our real experiences?
The Silence of Animals is consistently fascinating, filled with unforgettable images and a delight in the conundrum of human existence—an existence that we decorate with countless myths and ideas, where we twist and turn to avoid acknowledging that we too are animals, separated from the others perhaps only by our self-conceit. In the Babel we have created for ourselves, it is the silence of animals that both reproaches and bewitches us.

John Gray is the author of many critically acclaimed books, including The Silence of Animals, The Immortalization Commission, Black Mass, and Straw Dogs. A regular contributor to The New York Review of Books, he has been a professor of politics at Oxford, a visiting professor at Harvard and Yale, and a professor of European thought at the London School of Economics. He now writes full-time.

Praise For The Silence of Animals: On Progress and Other Modern Myths…

“Gray's godless mysticism asks us to look outside ourselves and simply see. This is a lot more difficult than it sounds . . . Sometimes I think John Gray is the great Schopenhauerian European Buddhist of our age. What he offers is a gloriously pessimistic cultural analysis, which rightly reduces to rubble the false idols of the cave of liberal humanism.” —Simon Critchley, The Los Angeles Review of Books

“[Gray's is] a powerful message, and not without elements of profundity. And it is conveyed with eloquence of language and dignity of thought.” —Robert W. Merry, The National Interest

“Gray's fans should find much here to please them. The range of literary, historical and philosophical extracts--from Conrad and Zweig to Borges and John Ashbery, and from Nietzsche and Freud to Robinson Jeffers and Czeslaw Milosz, to name only a few--is broad and deep. Gray's own utterances are by turns characteristically dark, audacious and outrageous.” —Caspar Henderson, The Telegraph

“Silence of Animals is a beautifully written book, the product of a strongly questioning mind. It is effectively an anthology with detailed commentary, setting out one rich and suggestive episode after another, each of which becomes only more suggestive by the juxtaposition.” —Philip Hensher, The Spectator