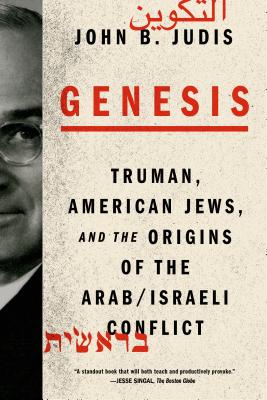 Truman, American Jews, and the Origins of the Arab/Israeli Conflict

There has been more than half a century of raging conflict between Jews and Arabs—a violent, costly struggle that has had catastrophic repercussions in a critical region of the world. In Genesis, John B. Judis argues that, while Israelis and Palestinians must shoulder much of the blame, the United States has been the principal power outside the region since the end of World War II and as such must account for its repeated failed diplomacy efforts to resolve this enduring strife.

The fatal flaw in American policy, Judis shows, can be traced back to the Truman years. What happened between 1945 and 1949 sealed the fate of the Middle East for the remainder of the century. As a result, understanding that period holds the key to explaining almost everything that follows—right down to George W. Bush's unsuccessful and ill-conceived effort to win peace through holding elections among the Palestinians, and Barack Obama's failed attempt to bring both parties to the negotiating table. A provocative narrative history animated by a strong analytical and moral perspective, and peopled by colorful and outsized personalities and politics, Genesis offers a fresh look at these critical postwar years, arguing that if we can understand how this stalemate originated, we will be better positioned to help end it.


Praise For Genesis: Truman, American Jews, and the Origins of the Arab/Israeli Conflict…

“A standout book that will both teach and productively provoke . . . [An] excellent book.” —Jesse Singal, The Boston Globe

“John Judis has long been one of America's best political historians. Now he's proved himself one of the best historians of American foreign policy towards Israel. You don't have to agree with all of John's conclusions to be powerfully impressed by the extent of his research, the quality of his insight, and his deep empathy for both Jews and Palestinians in the tortured land between the Jordan River and the Mediterranean Sea. One of the best books about the U.S.-Israel relationship I have ever read.” —Peter Beinart, author of The Crisis of Zionism

“John Judis fairly and carefully explores Harry Truman's conflicted attitudes toward the establishment of the state of Israel--and he does far more. A conscientious attempt to deal with the ethical paradoxes involved in the establishment of the state of Israel, this book makes us aware of the implacable moral ambiguities with which we all must live as we make choices in a deeply flawed world.” —Alonzo L. Hamby, Distinguished Professor of History, Ohio University; author of Man of the People: A Life of Harry S. Truman

“This is the best kind of history--taking a historical episode we think we know about (Truman recognizing the new state of Israel) and probing what really happened and what it meant for the future. John Judis is one of America's best journalists. In Genesis he brings together both lucid writing and passionate insight in a way that sheds light on current American policy in the Middle East.” —James Mann, author of Rise of the Vulcans and The Obamians

“Genesis, John Judis's history of the Truman administration's relationship to Israel and its neighbors, is a smart, unsentimental, and independent-minded rendering of a complicated tale. His arguments and evidence challenge the comforting myths that sustain all sides of this tragic conflict and, in doing so, have the potential to point all its actors in a more hopeful direction in the future.” —Eric Alterman, author of The Cause: The Fight for American Liberalism from Franklin Roosevelt to Barack Obama

John B. Judis is a senior editor at The New Republic and has also written for GQ, Foreign Affairs, Mother Jones, The New York Times Magazine, and The Washington Post. He is the author of The Folly of Empire and The Emerging Democratic Majority, among other books.
Loading...
or
Not Currently Available for Direct Purchase