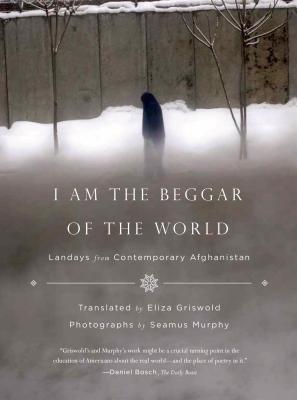 I Am the Beggar of the World presents an eye-opening collection of clandestine poems by Afghan women.

Afghans revere poetry, particularly the high literary forms that derive from Persian or Arabic. But the poem above is a folk couplet—a landay, an ancient oral and anonymous form created by and for mostly illiterate people: the more than 20 million Pashtun women who span the border between Afghanistan and Pakistan. War, separation, homeland, love—these are the subjects of landays, which are brutal and spare, can be remixed like rap, and are powerful in that they make no attempts to be literary.

From Facebook to drone strikes to the songs of the ancient caravans that first brought these poems to Afghanistan thousands of years ago, landays reflect contemporary Pashtun life and the impact of three decades of war. With the U.S. withdrawal in 2014 looming, these are the voices of protest most at risk of being lost when the Americans leave.

After learning the story of a teenage girl who was forbidden to write poems and set herself on fire in protest, the poet Eliza Griswold and the photographer Seamus Murphy journeyed to Afghanistan to learn about these women and to collect their landays. The poems gathered in I Am the Beggar of the World express a collective rage, a lament, a filthy joke, a love of homeland, an aching longing, a call to arms, all of which belie any facile image of a Pashtun woman as nothing but a mute ghost beneath a blue burqa.

“Eliza Griswold and Seamus Murphy have made a book that is necessary reading for anyone who has ever made assumptions from a distance about what a burka-wearing woman might be like, and for anyone who cannot fathom how poetry could get you killed. In other words, this book is a must-read for every U.S. citizen . . . Griswold's and Murphy's work might be a crucial turning point in the education of Americans about the real world--and the place of poetry in it.” —Daniel Bosch, The Daily Beast

“The poems in I Am the Beggar of the World cut like a knife--they are short, sharp--and leave you bleeding. They are the most direct voices of the inner life of Afghan women, and prove that these women, despite all hardships, are still standing. These two-liners make the reader feel close to the women that we've seen so often on the screen wandering like blue-clad ghosts on the dusty roadsides. A heart is a heart anywhere in the world.” —Åsne Seierstad, author of The Bookseller of Kabul

“I Am the Beggar of the World is a revelatory book about Afghanistan, one sure to turn all the stereotypes about the country's women on their heads. The poems, equally art and reportage, are often poignant, more often witty, even pungent. They, along with the accompanying text and photographs, illuminate the beauty of the country and its culture, the sadness of its history, and the humor, the hopes, the bitterness, and even the contradictions its women--no different than women anywhere--carry in their hearts. This is an important book, but to describe it only that way is to neglect how deeply pleasurable it is to read.” —Amy Waldman, author of The Submission

Seamus Murphy has documented life and change around the world. He has won seven World Press Photo awards for work from Afghanistan, Sierra Leone, Gaza, Lebanon, Peru, Ireland and England. His depiction of Afghanistan and the Afghans over more than a decade was published as a book, A Darkness Visible: Afghanistan.
Loading...
or support indie stores by buying on