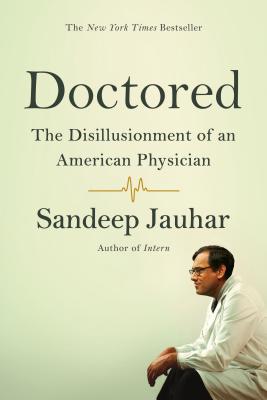 The Disillusionment of an American Physician

In his acclaimed memoir Intern, Sandeep Jauhar chronicled the formative years of his residency at a prestigious New York City hospital. Doctored, his harrowing follow-up, observes the crisis of American medicine through the eyes of an attending cardiologist.
Hoping for the stability he needs to start a family, Jauhar accepts a position at a massive teaching hospital on the outskirts of Queens. With a decade's worth of elite medical training behind him, he is eager to settle down and reap the rewards of countless sleepless nights. Instead, he is confronted with sobering truths. Doctors' morale is low and getting lower. Blatant cronyism determines patient referrals, corporate ties distort medical decisions, and unnecessary tests are routinely performed in order to generate income. Meanwhile, a single patient in Jauhar's hospital might see fifteen specialists in one stay and still fail to receive a full picture of his actual condition.
Provoked by his unsettling experiences, Jauhar has written an introspective memoir that is also an impassioned plea for reform. With American medicine at a crossroads, Doctored is the important work of a writer unafraid to challenge the establishment and incite controversy.


Praise For Doctored: The Disillusionment of an American Physician…

“In this absorbing memoir-cum-analysis, Sandeep Jauhar traces his years as a fledgling cardiologist against the backdrop of a health-care system in peril . . . An impassioned call to action.” —Barbara Kiser, Nature

“A supremely well-written, thought-provoking memoir that strikes the perfect balance between ideas and sentiment.” —G. Sampath, The Hindustan Times

“An extraordinary, brave and even shocking document. Dr. Jauhar's sharply observed anxieties make him a compelling writer and an astute critic of the wasteful, mercenary, cronyistic and often corrupt practice of medicine today.” —Florence Williams, The New York Times (Science)

“Highly engaging and disarmingly candid . . . Dr. Jauhar does a service by describing eloquently the excesses and dysfunctions of patient care and the systemic distortions responsible for them.” —The Wall Street Journal

“Bold and fascinating . . . [Jauhar] interweaves his personal story as well as anecdotes about his patients into a meticulously researched and painfully honest account of a profession . . . This beautifully written and unsparing memoir puts a human face on the vast, dysfunctional system in which patients and clinicians alike are now entangled.” —The Boston Globe

“Arresting...Dr. Jauhar's book is often moving, especially when he focuses on his patients...this thoughtful telling provides a service in itself. Because the first step toward healing is, of course, getting a good diagnosis.” —Susannah Meadows, The New York Times

“A compelling call for reform.” —The New York Daily News

“In this searing critique of overtreatment, cronyism and cover-your-ass medical care, a cardiologist confronts the 'collective malaise' infecting the American medical profession as he opens a vein to reveal his own complicity and shattered ideals. Jauhar offers, if not a cure, a prescription for restoring dignity to patient and healer alike.” —More

“Precise, observant...Doctored features many vivid accounts of Jauhar's encounters with patients and colleagues, illustrating the high-stakes ethical and professional decisions physicians face daily. These stories, often deeply personal, bring a human dimension to his sharp critique of a ‘system that makes us bad, makes us make mistakes.'” —Shelf Awareness

“An engaging memoir that probes for the source of the ‘collective malaise' that grips [Jauhar's] profession.” —The Federalist

“Sandeep Jauhar's Doctored is a passionate and necessary book that asks difficult questions about the future of medicine. The narrative is gripping, and the writing is marvelous. But it was the gravity of the problem--so movingly told--that grabbed and kept my attention throughout this remarkable work.” —Siddhartha Mukherjee, author of The Emperor of All Maladies: A Biography of Cancer

“Medicine's radical transformation in recent years has brought both incredible scientific advances and an increasingly dysfunctional health care system. Doctored takes us behind the façade and allows us to see the seamy underbelly. Jauhar's gift is to observe and to beautifully tell the stories. In doing so he leads us to a visceral understanding of what has gone wrong. Doctored is a manifesto for reform.” —Abraham Verghese, author of Cutting for Stone

“Sandeep Jauhar specializes in peeling back the veneer, revealing the discomfiting truths of today's medical world. He is unafraid to dig deeply and honestly, both within himself and within the medical profession. Doctored raises critical questions that twenty-first-century medicine must answer if it is to meet the needs of its patients as well as of its practitioners.” —Danielle Ofri, M.D., Ph.D., author of What Doctors Feel: How Emotions Affect the Practice of Medicine

“Sandeep Jauhar is a compelling storyteller, and Doctored gives us a fantastic tour through the seedy underworld of American medicine.” —Lisa Sanders, M.D., Assistant Professor, Yale School of Medicine, and author of Every Patient Tells a Story

Sandeep Jauhar, MD, PhD, is the director of the Heart Failure Program at Long Island Jewish Medical Center. He is the bestselling author of Doctored and Intern and a New York Times Contributing Opinion Writer. He lives with his wife and their son and daughter on Long Island.
Loading...
or support indie stores by buying on