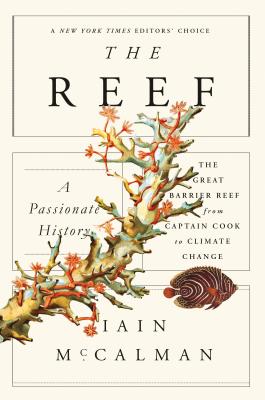 A Passionate History: The Great Barrier Reef from Captain Cook to Climate Change

Stretching 1,400 miles along the Australian coast and visible from space, the Great Barrier Reef is home to three thousand individual reefs, more than nine hundred islands, and thousands of marine species, and has alternately been viewed as a deadly maze, an economic bounty, a scientific frontier, and a precarious World Heritage site. Now the historian and explorer Iain McCalman takes us on a new adventure into the reef to reveal how our shifting perceptions of the natural world have shaped this extraordinary seascape. Showcasing the lives of twenty individuals spanning more than two centuries, The Reef highlights our profound desire to conquer, understand, embrace, and ultimately save the world's most complex ocean ecosystem.

Opening with the story of Captain James Cook, who sailed unknowingly into the southwest entrance of this vast network of coral outcroppings, McCalman shows how Cook spent months navigating this treacherous underwater labyrinth, struggling to keep his crew alive and his ship afloat, sparring with deceptive shoals and wary native islanders. Through a series of dramatic tales from intrepid explorers, unwitting castaways, inquisitive naturalists, enchanted artists, and impassioned environmentalists who have collectively shaped our ideas about the Great Barrier Reef, McCalman demonstrates how this grand natural wonder of the world was built as much by human imagination as by the industrious, beautiful creatures of the sea.

A romantic, historically significant book and a deeply personal journey into the heart of a marine environment in peril, The Reef powerfully captures the delicate relationship between humanity and the natural world.


Praise For The Reef: A Passionate History: The Great Barrier Reef from Captain Cook to Climate Change…

“[Iain] McCalman has written an innovative history . . .His approach is at once episodic and kaleidoscopic . . . McCalman's own passion for the Reef informs the book throughout, whether in his engaging account of sailing through it in a replica of Cook's HMS Endeavour, or in his concluding laments for its environmental degradation . . . For a work about such a vast topic--big in scale, big in its implications for how we hold a planet in trust--The Reef is a compellingly intimate account of human interaction with this slice of nature.” —David Armitage, Los Angeles Review of Books

“By the end of McCalman's transformative book, we feel the full force of this slow-motion emergency. In story after story of fascination and trepidation, in revelations and in requiems, this passionate history brings to life the Great Barrier Reef's magnificent mutability.” —Rob Nixon, The New York Times Book Review

“Reefs, like their terrestrial counterparts, tropical rainforests, are increasingly threatened by human activity; some already exhibit a marked decline. Like rainforests, too, they show exceptional biodiversity, a characteristic which is increasingly valued as an index of the wellbeing of our planet. It is this decline that makes Iain McCalman's The Reef, on the discovery, history and future prospects of Australia's Great Barrier Reef, so timely. It is fascinating because of the wealth of information it contains on both familiar and unfamiliar topics.” —Andrew Campbell, Times Literary Supplement

“A masterly biography of the Great Barrier Reef . . . Mr McCalman's sweeping and absorbing history is well timed.” —The Economist

“Australia's Great Barrier Reef stretches for around 1,430 miles along the continent's northeast coast, encompassing an area roughly half the size of Texas. Those who have dived into its pristine reaches know firsthand that it is one of Earth's natural wonders--a coral world of exceptional beauty and diversity. Yet as Iain McCalman's "passionate history" of the reef makes clear, it is also a stage on which dreams, ambitions, and great human tragedies have been played out. He tells his story by chronicling lives that, either inadvertently or intentionally, have shaped our perception of the coralline labyrinth.” —Tim Flannery, The New York Review of Books

“Iain McCalman's The Reef, like its subject, builds slowly into beauty, offering an account of the Great Barrier Reef as it exists in culture, language and dream, as well as in marine biology.” —Robert Macfarlane, The Observer (UK)

“McCalman's tone shifts from the boy's own adventure, scientific excitement and scamming of early encounters, to dizzying disaster-epic suspense. But never for a moment does his literary skill falter. His detailed explanation of marine science is a model of translation for the layman. And his respect for Indigenous people is a model of intercultural translation . . . He describes the Indigenous view of events without exoticising the individuals he talks to. Nostalgia permeates the book, for ancestral lands lost and for what we all might be losing now.” —Miriam Cosic, The Guardian (UK)

“Splendid . . . [A] wonderful paean to the Great Barrier Reef.” —David B. Williams, The Seattle Times

“The Great Barrier Reef is both easily understood and awe-inspiring in this history of its discovery, exploitation and beauty.” —Julia Jenkins, Shelf Awareness

“[Iain McCalman's] mission is to illuminate the reef's glorious complexity by recounting the stirring, wild, and surprising stories of fraught encounters between islanders and outsiders . . . [His] ‘passionate history' is a call to save this ‘fragile global wonder.'” —Donna Seaman, Booklist

“McCalman loves the reef and fears for its future . . . [He] selects his subjects judiciously and writes with flair, creating a multifaceted portrait of one of the world's great wonders.” —Kirkus Reviews

“Combining engaging accounts of early explorers with discussion of current scientific findings and their implications . . . McCalman's book will be enjoyed by the general reader, students at the undergraduate level, those interested in the history of science, and travelers to this magnificent region.” —Judith B. Barnett, Library Journal

“Brilliant, beautiful, a hymn to the past, present and increasingly uncertain future of one of the world's greatest treasures. The Reef is necessary reading for anyone who cares about the future of the ocean.” —James Bradley, author of Flags of Our Fathers

“The Great Wall of China is dwarfed to nothingness, along with everything else proud humans have built, by the minuscule polyps that fashioned the Great Barrier Reef. That living reef, the world's largest, is in desperate trouble, the victim of climate change and a melancholy legacy of carelessness, indifference, and greed. The Reef is more than a lament; it is a brilliant history of our long interaction with this precious feature of our world, weaving together coexistence, terror, exploration, exploitation, scientific curiosity, and love. Iain McCalman has a rare gift for conjuring up both famous and forgotten lives and for awakening our wonder.” —Stephen Greenblatt, Pulitzer Prize–winning author of The Swerve: How the World Became Modern

“Usually a subject of natural history, the Great Barrier Reef finally finds a place in a contradiction fundamental to the history of modernity: the desire to preserve nature while exploiting it for profit. With this book, Iain McCalman cements his reputation as one of the finest historians of our time.” —Dipesh Chakrabarty, Professor of History, University of Chicago

“History doesn't get any more lively than this. A stylish, racing read, The Reef surprises with every turn of the page, investing one of the world's greatest natural structures with human drama. In almost cinematic episodes that veer from scientific epiphany to physical brutality, from the eighteenth century to our own conflicted age, Iain McCalman introduces an amazing cast of characters. In the process--and it's a very entertaining one--he creates an entirely new account of a natural marvel, couched in gripping historical narrative, both witty and rigorously scholarly, sweepingly grand and vividly detailed.” —Philip Hoare, author of The Whale: In Search of the Giants of the Sea

“The magnitude of the awesome Great Barrier Reef is matched here by Iain McCalman's deep exploration of its compelling history and colorful ecology. An important biography of a fragile place.” —Katherine Harmon Courage, author of Octopus! The Most Mysterious Creature in the Sea

“In The Reef, Iain McCalman artfully weaves scientific inquiry and historical rigor into the life stories of twenty individuals. As we experience this extraordinary place through their eyes, we come away informed and inspired.” —Jim Toomey, creator of Sherman's Lagoon and executive director of Mission Blue

“No other historian I know brings together exploration, science, the environment, and strange experience with the erudition and the eloquence of Iain McCalman. The Reef is utterly absorbing as well as richly informative.” —Nicholas Thomas, director and curator of the Museum of Archaeology and Anthropology, University of Cambridge

Iain McCalman is a fellow of the Royal Historical Society, a historian, a social scientist, and an explorer. He is the author of the award-winning Darwin's Armada, The Seven Ordeals of Count Cagliostro, and Radical Underworld. A professor of history at the University of Sydney, he has served as the president of the Australian Academy of the Humanities and the director of the Humanities Research Centre at the Australian National University. McCalman has also been a historical consultant and narrator for documentaries on the BBC and ABC, and has been interviewed by Salon and the World Science Festival.
Loading...
or support indie stores by buying on