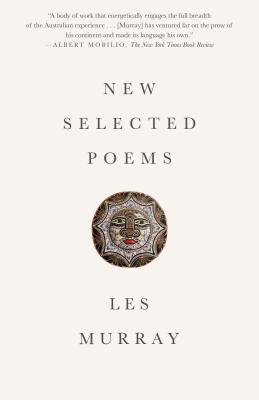 Why write poetry? For the weird unemployment.
For the painless headaches, that must be tapped to strike
down along your writing arm at the accumulated moment.
For the adjustments after, aligning facets in a verb
before the trance leaves you. For working always beyond

your own intelligence.
—from "The Instrument"

New Selected Poems contains Les Murray's own gathering from the full range of his poetry—from the 1960s through Taller When Prone (2004) and including previously uncollected work.
One of the finest poets writing today, Murray reinvents himself with each new collection. Whether writing about the indignities of childhood or the depths of depression, or evoking the rhythms of the natural world; whether writing in a sharply rendered Australian vernacular or a perfectly pitched King's English, his versatility and vitality are a constant. New Selected Poems is the poet's choice of his essential works: an indispensable collection for readers who already love his poetry, and an ideal introduction for those who are new to it.

“Would somebody please, please give this guy his Nobel Prize? Les Murray is 75, a farmer, an Australian, an outspoken conservative Catholic, and one of the planet's best poets writing in English . . . New Selected Poems is Murray's first such career survey since 2000. It's a bracing read; Murray always is. He's a cultivated roughneck, cultivating awkwardness and brute English to create unsuspected, original loveliness . . . [Murray's] poems leave you vertical and delighted. So much of this book leaves a smile of pleasure and gratitude for a poet this good. Get him that Nobel, someone.” —John Timpane, The Philadelphia Inquirer

“Murray's New Selected Poems is an event, a desert island book from a continent mostly desert. The volume includes more of his furiously inventive early work and 113 pages of poetry drawn from the five collections published since Learning Human (1998), his previous selected collection. Here is ‘The Burning Truck,' a poem that evokes war, innocents' response to war, and the transformative power of the unpredictable. Murray writes, addressing this truck, ‘but set us free.' Much of the thrust of Murray's verse is found in this wish and in parsing whom ‘us' refers to and the nature of the freedom they wish for. Murray, acutely sensitive to how language reflects class and distorts values, wields it as a great leveler; because his poetry liberates us. His forms never draw attention to themselves, and, at his best, Murray is a seer, his versification effortless, breathing. Among dozens of peerless descriptions, Murray sees a foal at the moment of birth ‘drop in the grass / like little loose bagpipes.' Other exceptional poems include ‘An Absolutely Ordinary Rainbow,' ‘The Mitchells,' ‘Equanimity,' and ‘Machine Portraits with Pendant Spaceman.'” —Michael Autrey, Booklist (starred)

“This first career selection since 2000 from the man who is arguably (and controversially) Australia's national poet gives U.S. readers another chance to see what makes him original, ambitious, cantankerous, much-honored, sometimes awkward, and sometimes great. Raised in the farm country of New South Wales, Murray (Taller When Prone) remains a champion of the agrarian landscape and of Australia's varied terrain. Early georgic and pastoral masterpieces show unforced attention to the details of flora, fauna, soil, and air, along with Murray's brilliantly ungainly line: ‘the sun is an applegreen blindness through the swells, a white blast on the sea face, flaking and shoaling.' Murray also writes superbly about animals, how we see them, and how they might see their world; about an Australian ideal of informality and acceptance; and in defense of the socially excluded. That same defensive instinct leads the pious Catholic poet (now age 75) to verse screeds against what Americans call ‘PC.' See past the polemic, however, and the Murray of the 1990s and (less often) the 2000s will reward you with terrifying yet empathetic short stories in verse, ballad stanzas, enjoyable rough-hewn couplets, and observant comments on the man-made environment in Australia and beyond. As Murray writes: ‘Wildlife crossings underneath/ the superglued pavement/ are jeep sized beasts must see/ nature restart beyond.'” —Publishers Weekly

“Les Murray has written some of the most astounding poems of our era. The opening words of several – ‘All me are standing on feed' or ‘Eye-and-eye eye an eye' or ‘Sleeping-bagged in a duplex wing' – announce a talent for reconfiguring the English language. In a lesser writer this would be mannerism, but Murray combines relentless technical adroitness with the courage to draw deeply on aspects of his own experience, some of them very dark indeed. . . Murray is one of the very few poets with whose best work you feel that having read it you won't, can't, be quite the same again . . . the New Selected Poems shows his range well, extending from religious lyric to social satire to the show-offy one-liner.” —Robert Crawford, London Review of Books

Les Murray (1938-2019) was a widely acclaimed poet, recognized by the National Trust of Australia as one of the nation’s treasures in 2012. He received the T. S. Eliot Prize for the Best Book of Poetry in English in 1996 for Subhuman Redneck Poems, and was also awarded the Gold Medal for Poetry presented by Queen Elizabeth II.

Murray also served as poetry editor for the conservative Australian journal Quadrant from 1990-2018. His other books include Dog Fox Field, Translations from the Natural World, Fredy Neptune: A Novel in Verse, Learning Human: Selected Poems, Conscious and Verbal, Poems the Size of Photographs, and Waiting for the Past.