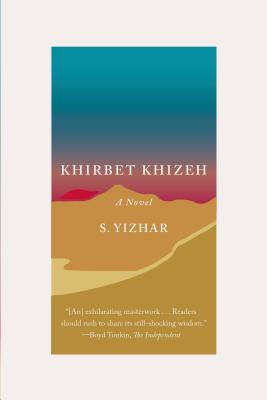 "Exhilarating . . . How often can you say about a harrowing, unquiet book that it makes you wrestle with your soul?" —Neel Mukherjee, The Times (London)

It's 1948 and the Arab villagers of Khirbet Khizeh are about to be violently expelled from their homes. A young Israeli soldier who is on duty that day finds himself battling on two fronts: with the villagers and, ultimately, with his own conscience.
Published just months after the founding of the state of Israel and the end of the 1948 war, the novella Khirbet Khizeh was an immediate sensation when it first appeared. Since then, the book has continued to challenge and disturb, even finding its way onto the school curriculum in Israel. The various debates it has prompted would themselves make Khirbet Khizeh worth reading, but the novella is much more than a vital historical document: it is also a great work of art. Yizhar's haunting, lyrical style and charged view of the landscape are in many ways as startling as his wrenchingly honest view of modern Israel's primal scene.
Considered a modern Hebrew masterpiece, Khirbet Khizeh is an extraordinary and heartbreaking book that is destined to be a classic of world literature.

S. Yizhar was the pen name of Yizhar Smilansky, born in Rehovot in 1916. A longtime member of the Knesset, he is most famous as the author of Khirbet Khizeh and the untranslated magnum opus Days of Ziklag. He died in 2006.

Praise For Khirbet Khizeh: A Novel…

“This narrow focus gives the book its extraordinary emotional force . . . Two things give Khirbet Khizeh lasting significance. The first is the intimate, personal scale on which it's composed . . . The other source of the power of Khirbet Khizeh: its connection to the present . . . [In Khirbet Khizeh] Yizhar Smilansky offers an answer, one that, over the years, has proved only two accurate.” —Dexter Filkins, New York Times Book Review

“[A] war novel that refuses all the pieties of that genre and develops into an anguished--and unresolved--meditation on Jewish history and the meaning of exile. Almost every episode screams out its relevance for today.” —Robyn Creswell, The Paris Review

“[This] classic of modern Hebrew prose… immediately becomes required reading for anyone interested in the history of Israel and Palestine… Ever since the Bible, the Land of Israel has been a subject of poetry and longing for Jewish literature, and Yizhar continues that tradition in a prose that is--as the afterword by David Shulman points out--full of untranslatable biblical echoes… The consequences of what happened at places like Khirbet Khizeh are still headline news, which makes this short, powerful book less a work of history than a work of prophecy.” —Adam Kirsch, The Christian Science Monitor

“Khirbet Khizeh resonates as both historical experience and art.” —The Times Literary Supplement

“An exhilarating masterwork . . . Readers should rush to share its still-shocking wisdom.” —The Independent