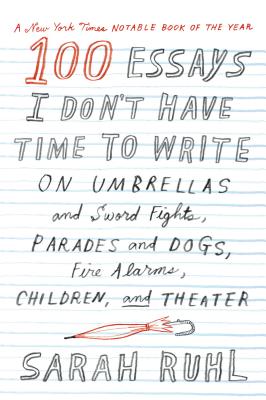 100 Essays I Don't Have Time to Write

On Umbrellas and Sword Fights, Parades and Dogs, Fire Alarms, Children, and Theater

100 Essays I Don't Have Time to Write is an incisive, idiosyncratic collection on life and theater from major American playwright Sarah Ruhl.

This is a book in which chimpanzees, Chekhov, and child care are equally at home. A vibrant, provocative examination of the possibilities of the theater, it is also a map to a very particular artistic sensibility, and an unexpected guide for anyone who has chosen an artist's life.

Sarah Ruhl is a mother of three and one of America's best-known playwrights. She has written a stunningly original book of essays whose concerns range from the most minimal and personal subjects to the most encompassing matters of art and culture. The titles themselves speak to the volume's uniqueness: "On lice," "On sleeping in the theater," "On motherhood and stools (the furniture kind)," "Greek masks and Bell's palsy."


Praise For 100 Essays I Don't Have Time to Write: On Umbrellas and Sword Fights, Parades and Dogs, Fire Alarms, Children, and Theater…

“Probing, bracing, and captivating . . . a cornucopia of compact, playfully profound observations on life in and out of theater.” —Lisa Shea, Elle

“Delectable . . . Admirers of Ms. Ruhl's stylistically audacious plays will not be surprised at these oddly shaped but neatly chiseled pieces, none of which run more than a few hundred words or so, and some of which are just a sentence or two. But each is tightly packed with fresh thought, smart thinking and lively humor . . . I stopped dog-earing the pages of my favorites when I realized there were barely any pages left uncreased.” —Charles Isherwood, The New York Times 2014 Holiday Gift Guide

“100 Essays I Don't Have Time to Write is in fact a work of profound moral organization . . . its deeper purpose is to define the artist's relationship to truth and to demonstrate how, from within the correctness of the artistic process, life can be meaningfully understood . . . Ruhl has found the time to ask the right questions--it's up to us to make the time to think about her--and our--answers.” —Rachel Cusk, The New York Times Book Review

“Ruhl writes pithy ruminations on language, art, and theater with a roving intelligence and compassion that are refreshingly accessible.” —Tomi Obaro, Chicago Magazine

“All readers, including theater buffs, will appreciate a behind-the-scenes vision of a harried Ruhl, shoeless toddler under one arm, tiny sneakers dangling by shoelaces from her teeth, stubbornly typing these pithy, diverting goodies with the other hand.” —Booklist

“Perceptive, funny, and intimate . . . 100 Essays reads like an extended, informal interview with one of the most original playwrights of our time . . . The essays, like her plays, bubble up with a sense of wonder, joy and excitement.” —Michael Bloom, American Theatre

“Sample the acclaimed playwright's bite-size musings on Ovid, lice, the relationship between chimpanzees and subscriber audiences, and 97 other topics. They take only a minute to read, but will linger with you much longer.” —Natalie Beach, O Magazine

“[T]he essays themselves are poignant examinations of imagination, the artistic life, mothering, and performance . . . The short format is deceptive; much like poetry, the reader occassionally comes across a few lines that say more than an entire chapter of a book.” —Michele Filgate, Barnes and Noble Review

“I have pretty much turned down every page of 100 Essays I Don't Have Time to Write to mark it to reread later. Basically, I will be rereading the whole book, and using it in my classes (and for myself) immediately. Ruhl is so smart and spot-on and capital R Refreshing about writing and art and more. An enormous pleasure.” —Aimee Bender, author of The Color Master

“Reading this book is like going on a rainy day treasure hunt through the attic of Sarah Ruhl's mind. You never know what you are going to come across in the next box--ruminations on motherhood, both comical and poignant; nuggets of startlingly frank autobiography; and then out of nowhere a short, spontaneous treatise that will make you think about theatre in a whole new way.” —Cynthia Nixon

“Sarah Ruhl's new book of essays is miraculous. The writing is evanescent while the thought is profound. I found it best to read the book in small bites, perhaps in the way that she wrote it. I carry it with me to sample regularly and repeatedly.” —Anne Bogart, author of A Director Prepares

“Fasten your seat belts! Sarah Ruhl is back! If the characters in her plays turn into almonds or travel to the underworld in raining elevators, you can imagine the delirium she whips up in essays she didn't have time to write! Illusion and reality link arms, igniting such wonder and merriment the reader's left breathless, begging for more.” —Tina Howe, author of Chasing Manet"Sarah

“Ruhl describes the perfect audience as being wise or innocent. These essays are wise and innocent. 100 Essays I Don't Have Time to Write is a masterpiece.” —Beth Henley, author of The Jacksonian

Sarah Ruhl's plays include In the Next Room, or the vibrator play (Pulitzer Prize finalist, Tony Award nominee); The Clean House (Pulitzer Prize finalist, Susan Smith Blackburn Prize); Passion Play, a cycle (PEN American Award); Dead Man's Cell Phone (Helen Hayes Award); and Stage Kiss and Dear Elizabeth. She has been the recipient of a MacArthur Fellowship, the Helen Merrill Emerging Playwrights Award, the Whiting Writers' Award, the PEN Center Award for a midcareer playwright, the Feminist Press's Forty Under Forty Award, and the 2010 Lilly Award. She is currently on the faculty at Yale School of Drama and lives in Brooklyn, New York, with her family.
Loading...
or support indie stores by buying on