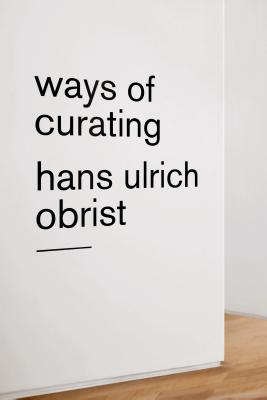 Hans Ulrich Obrist curated his first exhibit in his kitchen when he was twenty-three years old. Since then he has staged more than 250 shows internationally, many of them among the most influential exhibits of our age.

Ways of Curating is a compendium of the insights Obrist has gained from his years of extraordinary work in the art world. It skips between centuries and continents, flitting from meetings with the artists who have inspired him (including Gerhard Richter, Louise Bourgeois, and Gilbert and George) to biographies of influential figures such as Diaghilev and Walter Hopps. It describes some of the greatest exhibitions in history, as well as some of the greatest exhibitions never realized. It traces the evolution of collections from Athanasius Kircher's seventeenth-century Wunderkammer to modern museums, and points the way for projects yet to come.

Obrist has rescued the word "curate" from wine stores and playlists to remind us of the power inherent in looking at art--and at the world--in a new way.


Praise For Ways of Curating…

“Ways of Curating is a unique and insightful guide which enables the reader to discover unexplored paths for a new curatorial approach.” —Marina Abramovic

“Hans Ulrich Obrist is a passionate communicator. In result, half the world is starting to live in the future now.” —Yoko Ono

“Obrist educates and delights, with the simple goal of sharing his life's joy.” —Publishers Weekly

“A succinct, personal perspective on the intellectual sources and enthusiams of a distinguished figure in the contemporary art world.” —Kirkus

“An engaging and erudite work that argues persuasively for the continued relevance of curating for the arts and wider society. His book is about the curator's role as a maker of exhibitions, a task that involves tracing hidden connections between artworks and forging untrammelled routes across culture in search of new ways of experiencing art; new ways of looking at the world around us. If that sounds like an impossibly romantic definition it's because this is an unapologetically personal account of the profession's development.” —Ekow Eshun, The Independent

“This is a highly intelligent, thoughtful and thought-provoking book. Obrist emerges as both scholarly and energetically engaged with the proliferation of ideas in modern culture today.” —Carl Wilkinson, Financial Times

“Brisk, eclectic . . . In recent decades, the art world has been somewhat tediously obsessed with this 'curatorial turn' and its apparent undermining of artists and critics alike. But Obrist is a good example of the expanded possibilities of the job, and the sheer energy he has brought to working with artists themselves is the abiding impression of Ways of Curating.” —Brian Dillon, Literary Review

Hans Ulrich Obrist is a Swiss-born curator and writer. He is the co-director of exhibitions and programs and the co-director of international projects at the Serpentine Galleries, London. His previous books include A Brief History of Curating; A Brief History of New Music; Everything You Always Wanted to Ask About Curating But Were Afraid to Ask; Sharp Tongues, Loose Lips, Open Eyes, Ears to the Ground; Ai Weiwei Speaks, and nearly thirty volumes of his Conversation Series of interviews with contemporary artists.
Loading...
or support indie stores by buying on