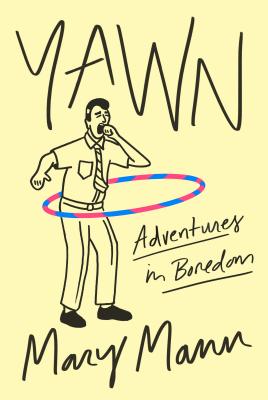 “An exhilarating tour of apathy, restlessness, torpor, depression, paralysis and the places in between” (Stacy Schiff, author of The Witches), Mary Mann’s Yawn: Adventures in Boredom is an incisive and often hilarious story of one of our most interesting cultural phenomena: boredom.

With sharp wit and impressive historical acumen, Mary Mann tells the unexpected story of the hunt for a deeper understanding of boredom, in all its absurd, irritating, and inspiring splendor. Deftly wrought from interviews, research, and personal experience, Yawn follows Mann’s search through history for the truth about boredom, spanning the globe and introducing a varied cast of characters.


Praise For Yawn: Adventures in Boredom…

"I am now compelled to specify the two commodities that I most cherish in nonfiction: 1) lots and lots of authorial voice and, 2) a modicum of surprise . . . Ms. Mann has both these qualities in spades. By trade a researcher (“like being a private detective, without the danger and the sex”), the delightful Ms. Mann comes off as a funny, very hip nerd." —Hebry Alford, New York Times

"This book of essays on boredom is anything but soporific. Exploring such different settings as the workplace, war zones, and libraries, Mann offers a witty and enjoyable discourse on a ubiquitous state of mind . . . Mann's wit and honesty will draw readers in, relegating actual boredom to the back burner until they've finished reading." —Publishers Weekly

"A lively exploration of a subject that's a lot less boring than you might expect it to be." —Booklist

“An exhilarating tour of apathy, restlessness, torpor, depression, paralysis and the places in between—all without a single longueur. Beautifully done.” —Stacy Schiff, author of The Witches

Mary Mann is the author of Yawn: Adventures in Boredom. Her writing has also appeared in The New York Times, Smithsonian, The Believer and The Los Angeles Review of Books.
Loading...
or support indie stores by buying on