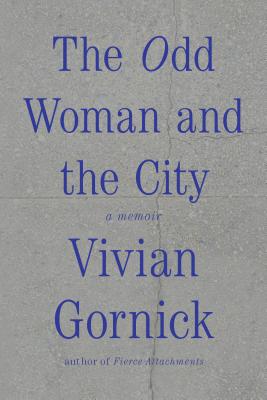 The Odd Woman and the City

A finalist for the National Book Critics Circle Award, Autobiography

A contentious, deeply moving ode to friendship, love, and urban life in the spirit of Fierce Attachments

A memoir of self-discovery and the dilemma of connection in our time, The Odd Woman and the City explores the rhythms, chance encounters, and ever-changing friendships of urban life that forge the sensibility of a fiercely independent woman who has lived out her conflicts, not her fantasies, in a city (New York) that has done the same. Running steadily through the book is Vivian Gornick's exchange of more than twenty years with Leonard, a gay man who is sophisticated about his own unhappiness, whose friendship has "shed more light on the mysterious nature of ordinary human relations than has any other intimacy" she has known. The exchange between Gornick and Leonard acts as a Greek chorus to the main action of the narrator's continual engagement on the street with grocers, derelicts, and doormen; people on the bus, cross-dressers on the corner, and acquaintances by the handful. In Leonard she sees herself reflected plain; out on the street she makes sense of what she sees.
Written as a narrative collage that includes meditative pieces on the making of a modern feminist, the role of the flaneur in urban literature, and the evolution of friendship over the past two centuries, The Odd Woman and the City beautifully bookends Gornick's acclaimed Fierce Attachments, in which we first encountered her rich relationship with the ultimate metropolis.


Praise For The Odd Woman and the City: A Memoir…

“[F]unny and elegiac and truth-dealing. . . . It's a slim book with big echoes. . . . What puts The Odd Woman and the City across, however, is how deeply Ms. Gornick gets into the fat of feeling. She is as good a writer about friendship as we have.” —Dwight Garner, The New York Times

“[Vivian Gornick is] a kind of ambassador for those most contested, conflicted of American genres, the personal essay and the memoir.” —Emily Stokes, The New York Times Book Review

“The best books, like the best friends and their best emails, like the most intimate and comforting conversations, make us feel understood. They make us feel like home is home. The Odd Woman and the City can be read as a guidebook for how to exist.” —Katherine Taylor, Los Angeles Times Review of Books

“Gornick's most ambitious attempt yet at the nonromance plot . . . richly felt.” —Laura Marsh, The New Republic

“A series of sharply observed vignettes.” —The New Yorker

“One of the most vital and indispensable essayists of our cultural moment.” —Phillip Lopate

“Vivian Gornick . . . has produced a new volume in the stubbornly candid, piercingly intelligent voice that informed her literary essays and criticism. . . . a ferocious intellectual inquisitiveness and a lifetime affair with a city where Gornick's aliveness, her alertness are rewarded daily.” —Misha Berson, The Seattle Times

“Gornick explores the ebb and flow of relationships with a blunt yet emotionally deft hand.” —Jenn Fields, The Denver Post

“[A] marvelous new memoir . . . Yes, we fall in love with Vivian Gornick - her chutzpah and fine mind, her wit, perseverance and resolve.” —The Buffalo News