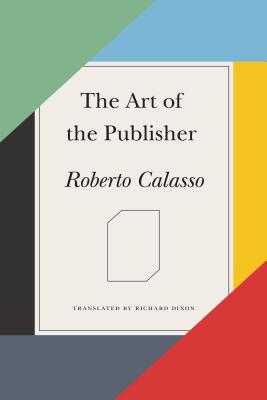 The Art of the Publisher

In this illuminating volume, Roberto Calasso reflects on more than half a century of distinguished literary publishing at Adelphi Edizioni in Milan. "Part merchant, part circus impresario, the publisher has always been considered with a certain mistrust, like a clever huckster," Calasso writes, and yet "publisher" may also be one of the most prestigious titles around.

Recalling the beginnings of Adelphi in the 1960s, Calasso touches on the house's defining qualities and its strategy of publishing a wide range of authors of high literary quality. Stepping back, he then considers the publishing industry as a whole, bringing his signature erudition and grasp of literary history to bear on various aspects of the enterprise. From the vital importance of jackets, design, and cover flaps to the consequences of universal digitization, Calasso offers a penetrating study of the industry and an essential survey of twentieth-century literature.

A daring defense of an industry in flux and an ode to publishers who devote themselves to "good books," The Art of the Publisher makes an insider’s case for publishing as a singular artistic form. An essential collection for writers, readers, and editors, it is a tribute to the age-old art of making books.


Praise For The Art of the Publisher…

“[Calasso is] a literary institution.” —The Paris Review on Roberto Calasso

“Calasso is not only immensely learned; he is one of the most original thinkers and writers we have today.” —Charles Simic on Roberto Calasso

“[Calasso] brings learning and passion to this chronicle of the business of getting books into the hands of readers . . . A treat for book lovers.” —Kirkus Reviews

Roberto Calasso, publisher of Adelphi in Milan, is the author of many books, among them The Ruin of Kasch, The Marriage of Cadmus and Harmony, Ka, K., and Tiepolo Pink.
Loading...
or
Not Currently Available for Direct Purchase