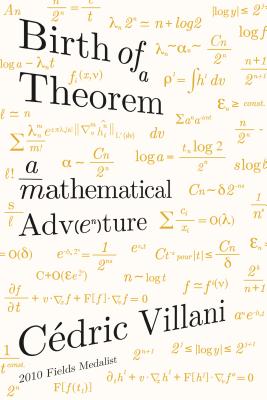 Birth of a Theorem

In 2010, the French mathematician Cédric Villani received the Fields Medal, the most coveted prize in mathematics, in recognition of a proof that he devised with his close collaborator Clément Mouhot to explain one of the most surprising theories in classical physics. Birth of a Theorem is Villani's own account of the years leading up to the award. It invites readers inside the mind of a great mathematician as he wrestles with the most important work of his career.

But you don't have to understand nonlinear Landau damping to love Birth of a Theorem. It doesn't simplify or overexplain; rather, it invites readers into a collaboration. Villani's diaries, e-mails, and musings enmesh you in the process of discovery. You join him in unproductive lulls and late-night breakthroughs. You're privy to dining-hall conversations at the world's greatest research institutions. Villani shares his favorite songs, his love of manga, and the imaginative stories he tells his children. In mathematics, as in any creative work, it is the thinker's whole life that propels discovery--and with Birth of a Theorem, Cédric Villani welcomes you into his.


Praise For Birth of a Theorem: A Mathematical Adventure…

Winner of the French-American Foundation Translation Prize in Nonfiction

“Villani has written probably the most unlikely unputdownable thriller of the decade.” —Richard Morrison,The Times

“[Birth of a Theorem] is less about math than about mathematicians—how they live, how they work, and how they talk to one another.” —Thomas Lin, The New Yorker

“Birth of a Theorem is a remarkable book and I urge everyone to buy it.” —Alexander Masters, The Spectator

“[Villani] is widely regarded as one of the most talented mathematicians of his generation . . . Ultimately, this is a story about the limits of what can be achieved. And in that respect it has everything: partnership, courage, doubt and anxiety, elation and despair. Villani’s path to success was not always easy, and he writes vividly of his setbacks and obstacles, detailing the inner monologue of self-doubt that we all experience, regardless of our ability.” —Hannah Fry, The Guardian

“Birth of a Theorem succeeds in giving us a glimpse . . . of what it feels like to be Cédric Villani.” —Evelyn Lamb, Scientific American Blog Network

“[Provides] a view of the math community not often seen by the general public . . . Villani's book eloquently humanizes mathematicians and is inexplicably fascinating even for the layperson.” —Publishers Weekly

“Cédric Villani's Birth of a Theorem is like no other book about math: an unfiltered view into the daily life, and the soul, of a great mathematician, as he approaches and finally conquers a major result.” —Jordan Ellenberg, author of How Not to Be Wrong: The Power of Mathematical Thinking

“[Villani] could plainly do for mathematics what Brian Cox has done for physics . . . [Birth of a Theorem] is one of the most peculiar and entertaining science books you will ever read . . . He realises that what seems too obvious to him-the beauty of maths-is baffling to almost everybody else, and he wants to break down the barrier this creates, not by condescendingly trying to be normal, but by being Cédric Villani. As maths is, as I say, the language that can make or break us, this is an urgent task that only Villani and only this book are addressing.” —Bryan Appleyard, Sunday Times

“Villani’s flair for storytelling, drawing on fables, metaphors and anecdotes, ensures that [Birth of a Theorem] is never boring.” —Stephen Muirhead, Chalkdust

“Birth of a Theorem should not be read as a book about mathematics or a mathematician. It is a book about life and a man whose zest for life is insatiable. Read it if you enjoy knowing that when approached in the right spirit by someone of sufficient energy and talent, life can be beautiful.” —Daniel W. Stroock, Notices of the American Mathematical Society

“Compellingly readable . . . I am not aware of any other account that so lucidly describes the desolation felt by mathematicians when a solution simply refuses to be found . . . But as Birth of a Theorem shows, the exhilaration when a breakthrough occurs is beyond compare.” —Noel-Ann Bradshaw, Times Higher Education

“A refreshing alternative to most pop-maths books . . . Villani pours you inside his mind and swirls you around, leaving you with nothing to hold on to and breathlessly wondering what you'll encounter next.” —Jacob Aron, New Scientist

Cédric Villani is the director of the Institut Henri Poincaré in Paris and a professor of mathematics at the Université de Lyon. His work on partial differential equations and various topics in mathematical physics has been honored by a number of awards, including the Fermat Prize and the Henri Poincaré Prize. He received the Fields Medal in 2010 for results concerning Landau damping and the Boltzmann equation.
Loading...
or support indie stores by buying on