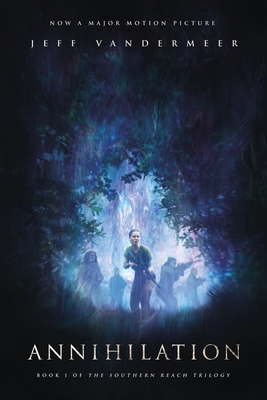 The Southern Reach Trilogy begins with Annihilation, the Nebula Award-winning novel that "reads as if Verne or Wellsian adventurers exploring a mysterious island had warped through into a Kafkaesque nightmare world" (Kim Stanley Robinson).

Area X has been cut off from the rest of the continent for decades. Nature has reclaimed the last vestiges of human civilization. The first expedition returned with reports of a pristine, Edenic landscape; the second expedition ended in mass suicide; the third expedition in a hail of gunfire as its members turned on one another. The members of the eleventh expedition returned as shadows of their former selves, and within weeks, all had died of cancer. In Annihilation, the first volume of Jeff VanderMeer's Southern Reach trilogy, we join the twelfth expedition.

The group is made up of four women: an anthropologist; a surveyor; a psychologist, the de facto leader; and our narrator, a biologist. Their mission is to map the terrain, record all observations of their surroundings and of one another, and, above all, avoid being contaminated by Area X itself.

They arrive expecting the unexpected, and Area X delivers—they discover a massive topographic anomaly and life forms that surpass understanding—but it's the surprises that came across the border with them and the secrets the expedition members are keeping from one another that change everything.

“The plot moves quickly and has all the fantastic elements you'd ever want--biological contaminants, peculiar creatures, mysterious deaths--but it's the novel's unbearable dread that lingers with me days after I've finished it.” —Justin Alvarez, The Paris Review
“It's been a long time since a book filled me with this kind of palpable, wondrous disquiet, a feeling that started on the first page and that I'm not sure I've yet shaken.” —Matt Bell, author of In the House upon the Dirt between the Lake and the Woods

“One of those books where it all comes together--the story and the prose and the ideas, all braided into a triple helix that gives rise to something vibrant and alive. Something that grows, word-by-word, into powerful, tangled vines that creep into your mind and take hold of it. Annihilation is brilliant and atmospheric, a novel that has the force of myth.” —Charles Yu, author of How to Live in a Science Fictional Universe

“The great thing about Annihilation is the strange, elusive, and paranoid world that it creates . . . I can't wait for the next one.” —Brian Evenson, author of Last Days

“After their high-risk expedition disintegrates, it's every scientist for herself in this wonderfully creepy blend of horror and science fiction . . . Speculative fiction at its most transfixing.” —Kirkus Reviews (starred review)

“A gripping fantasy thriller, Annihilation is thoroughly suspenseful. In a manner similar to H. G. Wells's in The Island of Dr. Moreau (1896), VanderMeer weaves together an otherworldly tale of the supernatural and the half-human. Delightfully, this page-turner is the first in a trilogy.” —Heather Paulson, ALA Booklist (starred review)

Jeff VanderMeer is the author of Dead Astronauts, Borne, and The Southern Reach Trilogy, the first volume of which, Annihilation, won the Nebula Award and the Shirley Jackson Award and was adapted into a movie by Alex Garland starring Natalie Portman. VanderMeer speaks and writes frequently about issues relating to climate change. He grew up in the Fiji Islands and now lives in Tallahassee, Florida, with his wife, Ann VanderMeer, and their cats, plants, and bird feeders.
Loading...
or
Not Currently Available for Direct Purchase