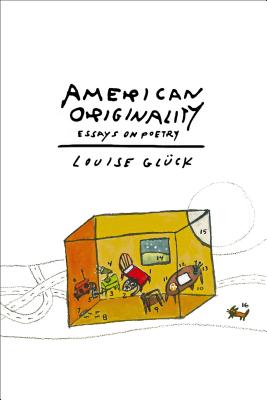 A luminous collection of essays from Louise Glck, winner of the Nobel Prize in Literature and one of our most original and influential poets

Five decades after her debut poetry collection, Firstborn, Louise Glck is a towering figure in American letters. Written with the same probing, analytic control that has long distinguished her poetry, American Originality is Glcks second book of essaysher first, Proofs and Theories, won the 1993 PEN/Martha Albrand Award for First Nonfiction. Glcks moving and disabusing lyricism is on full display in this decisive new collection.

From its opening pages, American Originality forces readers to consider contemporary poetry and its demigods in radical, unconsoling, and ultimately very productive ways. Determined to wrest ample, often contradictory meaning from our current literary discourse, Glck comprehends and destabilizes notions of narcissism and genius that are unique to the American literary climate. This includes erudite analyses of the poets who have interested her throughout her own career, such as Rilke, Pinsky, Chiasson, and Dobyns, and introductions to the first books of poets like Dana Levin, Peter Streckfus, Spencer Reece, and Richard Siken. Forceful, revealing, challenging, and instructive, American Originality is a seminal critical achievement.

"When one of the nations great living poets sets her observational eye on the state of the American letterspoetry specificallyit is for all of us to pay attention . . . Glck is an essayist at once generous and sharp, and her insights into craft, classic American poetry, and the souls of the poets, are essential reading." Jonny Diamond, LitHub