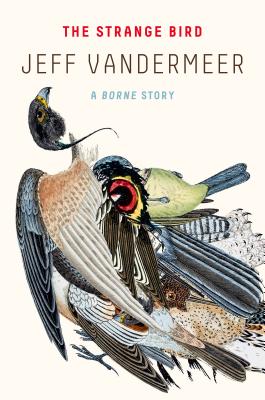 The Strange Bird—from New York Times bestselling novelist Jeff VanderMeer—expands and weaves deeply into the world of his “thorough marvel”* of a novel, Borne.

The Strange Bird is a new kind of creature, built in a laboratory—she is part bird, part human, part many other things. But now the lab in which she was created is under siege and the scientists have turned on their animal creations. Flying through tunnels, dodging bullets, and changing her colors and patterning to avoid capture, the Strange Bird manages to escape.

But she cannot just soar in peace above the earth. The sky itself is full of wildlife that rejects her as one of their own, and also full of technology—satellites and drones and other detritus of the human civilization below that has all but destroyed itself. And the farther she flies, the deeper she finds herself in the orbit of the Company, a collapsed biotech firm that has populated the world with experiments both failed and successful that have outlived the corporation itself: a pack of networked foxes, a giant predatory bear. But of the many creatures she encounters with whom she bears some kind of kinship, it is the humans—all of them now simply scrambling to survive—who are the most insidious, who still see her as simply something to possess, to capture, to trade, to exploit. Never to understand, never to welcome home.

With The Strange Bird, Jeff VanderMeer has done more than add another layer, a new chapter, to his celebrated novel Borne. He has created a whole new perspective on the world inhabited by Rachel and Wick, the Magician, Mord, and Borne—a view from above, of course, but also a view from deep inside the mind of a new kind of creature who will fight and suffer and live for the tenuous future of this world.

*“Jeff VanderMeer’s Southern Reach Trilogy was an ever-creeping map of the apocalypse; with Borne he continues his investigation into the malevolent grace of the world, and it's a thorough marvel.” —Colson Whitehead

“VanderMeer is that rare novelist who turns to nonhumans not to make them approximate us as much as possible but to make such approximation impossible. All of this is magnified a hundredfold in Borne . . . Here is the story about biotech that VanderMeer wants to tell, a vision of the nonhuman not as one fixed thing, one fixed destiny, but as either peaceful or catastrophic, by our side or out on a rampage as our behavior dictates—for these are our children, born of us and now to be borne in whatever shape or mess we have created. This coming-of-age story signals that eco-fiction has come of age as well: wilder, more reckless and more breathtaking than previously thought, a wager and a promise that what emerges from the twenty-first century will be as good as any from the twentieth, or the nineteenth.” —Wai Chee Dimock, The New York Times Book Review


Praise For The Strange Bird: A Borne Story…

Praise for The Strange Bird

"With hallucinatory imagery and expressive prose, this companion novella to Borne is beautiful and bleak, painful and rewarding in equal measure." --Booklist (starred)

“The conceptual elements in VanderMeer’s fiction are so striking that the firmness with which he cinches them to his characters’ lives is often overlooked . . . Borne is VanderMeer’s trans-species rumination on the theme of parenting . . . [Borne] insists that to live in an age of gods and sorcerers is to know that you, a mere person, might be crushed by indifferent forces at a moment’s notice, then quickly forgotten. And that the best thing about human nature might just be its unwillingness to surrender to the worst side of itself.” --Laura Miller, The New Yorker

“Borne, Jeff VanderMeer’s lyrical and harrowing new novel, may be the most beautifully written, and believable, post-apocalyptic tale in recent memory . . . [VanderMeer] outdoes himself in this visionary novel shimmering with as much inventiveness and deliriously unlikely, post-human optimism as Borne himself.” --Elizabeth Hand, Los Angeles Times

“VanderMeer’s apocalyptic vision, with its mix of absurdity, horror, and grace, can’t be mistaken for that of anyone else. Inventive, engrossing, and heartbreaking, Borne finds [VanderMeer] at a high point of creative accomplishment.” --Michael Berry, San Francisco Chronicle