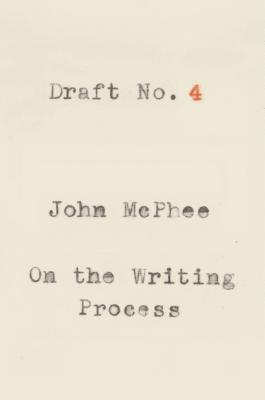 On the Writing Process

Draft No. 4 is a master class on the writer’s craft. In a series of playful, expertly wrought essays, John McPhee shares insights he has gathered over his career and has refined while teaching at Princeton University, where he has nurtured some of the most esteemed writers of recent decades. McPhee offers definitive guidance in the decisions regarding arrangement, diction, and tone that shape nonfiction pieces, and he presents extracts from his work, subjecting them to wry scrutiny. In one essay, he considers the delicate art of getting sources to tell you what they might not otherwise reveal. In another, he discusses how to use flashback to place a bear encounter in a travel narrative while observing that “readers are not supposed to notice the structure. It is meant to be about as visible as someone’s bones.” The result is a vivid depiction of the writing process, from reporting to drafting to revising—and revising, and revising.

Draft No. 4 is enriched by multiple diagrams and by personal anecdotes and charming reflections on the life of a writer. McPhee describes his enduring relationships with The New Yorker and Farrar, Straus and Giroux, and recalls his early years at Time magazine. Throughout, Draft No. 4 is enlivened by his keen sense of writing as a way of being in the world.


Praise For Draft No. 4: On the Writing Process…

"Followers of John McPhee, perhaps the most revered nonfiction narrative journalist of our time, will luxuriate in the ship-shape prose of "Draft No. 4" . . . Delightful . . . Interspersed with observations every writer should remember . . . The last three chapters will be assigned and reassigned by grateful writing teachers . . . I savored every word"—Corby Kummer, New York Times Book Review

"[Draft No. 4]'s combination of shop talk, war stories, slices of autobiography, and priceless insights and lessons suggests what it must be like to occupy a seat in the McPhee classroom . . . McPhee's observations about writing are always invigorating to engage with. And Draft No. 4 belongs on the short shelf of essential books about the craft." —Ben Yagoda, The Wall Street Journal

"A sunny tribute to the gloomy side of the writing life . . . It's McPhee on McPhee; commentary on his greatest hits, a little backstory, a little affectionate gossip . . . His advice is in the service of making the text as sturdy, useful and beautiful as possible. It's an intimate book—and intimacy is rare in McPhee's work . . . For most of his career, McPhee has written reverently about . . . methodical, somewhat solitary men (mostly) who work with their hands and take quiet pride in their work." —Parul Sehgal, The New York Times

"A book that any writer, aspiring or accomplished, could profitably read, study and argue with . . . For over half a century, John McPhee—now 86—has been writing profiles of scientists, eccentrics and specialists of every stripe. All are exceptional at what they do. So, too, is their discerning chronicler." —Michael Dirda, The Washington Post

"Draft No. 4 is as lean and punchy a book as anything McPhee wrote in his thirties . . . The book's ostensible focus of imparting the wisdom accumulated over a lifetime of writing blurs often and very enjoyably with reminiscences about McPhee's own long apprenticeship in the craft . . . The star attraction here isn't the method but the man; readers who go in knowing that will be endlessly fascinated—and may learn a good deal." —Steve Donoghue, The Christian Science Monitor

"The beauty of Draft No. 4 lies partly in our watching a master deconstruct the nearly invisible habits of his work. The result celebrates a life—probing, colorful, singular—devoted to writing." —Joan Silverman, Portland Press Herald

"Reading [these essays] consecutively in one volume constitutes a master class in writing, as the author clearly demonstrates why he has taught so successfully part-time for decades at Princeton University. . . . Almost every sentence sparkles, with wordplay evident throughout. . . . Readers already familiar with the author's masterpieces . . . will feel especially fulfilled by McPhee's discussions of the specifics from his many books. . . . A superb book about doing his job by a master of his craft." —Kirkus Reviews (starred review)

"[Draft No. 4 is] not a general how-to-do-it manual but a personal how-I-did-it of richer depth—not bouillon cubes, but rich stock . . . McPhee lays it all out with the wit of one who believes that 'writing has to be fun at least once in a pale blue moon.'" —Publishers Weekly

"McPhee has set the standard for the genre of creative nonfiction . . . With humor and aplomb, he recalls anecdotes about how he approached a story: from interviewing and reporting to drafting and revising, to working with editors and publishers . . . [Draft No. 4 is] a well-wrought road map to navigating the twists and turns, thrills and pitfalls, and joys and sorrows of the writer's journey." —Donna Marie Smith, Library Journal

"McPhee taught us to revere language, to care about every word, and to abjure the loose synonym . . . Perhaps there are writers out there who make it look easy, but that is not the example set by McPhee. He is of the school of thought that says a writer is someone for whom writing is more difficult than for other people. Some people joke about lashing themselves to the chair to get a piece of writing done, but McPhee actually has done it, with the belt of his bathrobe . . . I doubt many of us ever took a class that resonated so profoundly over the years." —Joel Achenbach, Princeton Alumni Weekly

"In college, I took a twelve-week writing course with McPhee at Princeton. I received a ‘P’—for ‘Pass.’ This was a mercy. McPhee has been teaching the course, so far as I know, since the Silurian Period. More than half of his former students have gone on to work at various magazines and newspapers, to write books. Actually, only a small percentage of McPhee’s students studied with him at Princeton; he has been for dozens and dozens of nonfiction writers what Robert Lowell used to be for poets and poet wannabes of a certain age: the model." —David Remnick

"McPhee’s sentences are born of patience and attention: he seems to possess a pair of eyes with the swivel, zoom and reach of a peregrine falcon’s, and a pair of ears with the recording ability of a dictaphone. He notices almost everything." —Robert Macfarlane, The Guardian