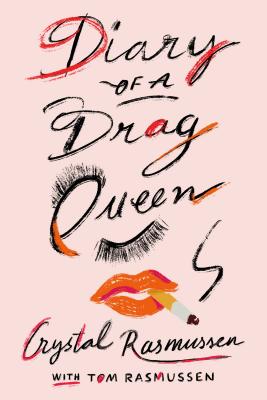 Diary of a Drag Queen

“This book changed my life. Tom Rasmussen’s honesty, vulnerability, and fearlessness jump out of every page and every word. It is the queer bible I’ve always needed.” —Sam Smith, singer and songwriter

"Tom covers the nuance, doubt, and uncertainty of being a drag queen. Crystal covers the transcendence . . . Charisma and quick intelligence—two qualities that have long been prerequisites for drag . . . Diary puts on technicolor display." —Katy Waldman, The New Yorker

In these pages, find glamour and gaffes on and off the stage, clarifying snippets of queer theory, terrifyingly selfish bosses, sex, quick sex, KFC binges, group sex, the kind of honesty that banishes shame, glimmers of hope, blazes of ambition, tender sex, mad dashes in last night's heels plus a full face of make-up, and a rom-com love story for the ages. This is where the unspeakable becomes the celebrated. This is the diary of a drag queen—one dazzling, hilarious, true performance of a real, flawed, extraordinary life.


Praise For Diary of a Drag Queen…

"Tom covers the nuance, doubt, and uncertainty of being a drag queen. Crystal covers the transcendence . . . This balancing act requires charisma and quick intelligence—two qualities that have long been prerequisites for drag, but that Diary puts on technicolor display . . . Queering the rom-com, or at least seeming to do so, actually spotlights the genre’s persistent debts to queerness, from the gender antics of Twelfth Night to Oscar Wilde’s silky social critiques."
—Katy Waldman, The New Yorker

“This book changed my life. Tom Rasmussen’s honesty, vulnerability, and fearlessness jump out of every page and every word. It is the queer bible I’ve always needed.”
—Sam Smith, singer and songwriter

"This hilarious memoir follows [Rasmussen] through a year of adventures, from being onstage to being in bed to realizing the fashion world is even more cutthroat than pop culture portrays it. Diary of a Drag Queen is equal parts inspiring and funny as hell."
—Evette Dionne, BitchMedia, "17 Memoirs Feminists Should Read in 2020"

“A must-read. Sexy and fun, Diary of a Drag Queen is about bodies and belonging, about self and transformation, and an attempt to understand our complicated minds. Full of laughs and tears, this book is a compelling look at what it means to be queer.”
—Kristen Arnett, author of Mostly Dead Things

"An extraordinarily deft account of just how complicated the life of a drag queen can be . . . Tom takes us beneath the surface, and into the day-to-day triumphs and tragedies of being a struggling drag queen in unforgiving cities. There are moments where I laughed so hard I peed; and there are moments where I cried so hard I basically choked. Some of the most beautiful passages are when Tom confesses how their drag alter-ego—Bolshevik-turned-Capitalist-Tycoon, Crystal—has been a way for them to celebrate the working-class women who raised them . . . If you’re looking for a book about the intersection of drag and class, and which is full of light, love and laughter, look no further."
—Amrou Al-Kadhi, Lit Hub

"Soul-baring, shamelessly explicit, and wickedly funny, Rasmussen's relentlessly entertaining book gets beneath the glitter and drama of drag to reveal how a practice often dismissed as misogynistic can serve as a kind of salvation for many nonbinary people . . . A sharp-eyed and hilarious memoir."
—Kirkus

"A cheeky, irreverent debut . . . Reads like a queer Bridget Jones’s Diary . . . Beyond being an entertaining romp, this memoir serves as an education for those living outside queer and drag circles. This exuberant, irreverent confessional is loud and proud with its message of acceptance and inclusion."
—Publishers Weekly

“A heartfelt memoir of queerness and non-conformity . . . [A] joyful and painful account of a queer life well lived . . . It is a case for intersectionality told in reality, not just in theory—and so, much needed.”
—Amelia Abraham, Vogue UK

“Hilarious and candid . . . A must read for anyone interested in drag. Or anyone with a sense of humour. Or just anyone at all.”
—Connor Young, Gay Times

“Truthful, revealing and obscenely hilarious . . . Strident and unapologetic but really sweet, too.”
—Attitude

“Accessible and hilarious . . . If you want a true depiction of what it's like to balance a drag queen persona with an everyday self, look no further.”
—Lauren Sharkey, Bustle

“Outrageously scatological, bacchanalian, and foul-mouthed . . . And yet—amazingly—it is precisely this radical honesty that means the book is never disgusting, or repulsive; far from it . . . Rasmussen’s voice as a writer is poetic, idiosyncratic, and unbelievably funny . . . [A] fierce debut.”
—The Prickle

Crystal Rasmussen is a global superstar in her mind and a regular columnist at Refinery29. Look up the term "Global Phenomenon" and you will find a picture of Crystal's face. Living in overdraft since the Wall Street Crash of 1929, Crystal forms one fifth of DENIM, the drag supergroup, and is adored for her lazy demeanor and her powerful falsetto.

Tom Rasmussen is a journalist and queer performer. When not in drag, they are a regular contributor at The Independent, Dazed, i-D, LOVE, and Refinery29. Their work has also been featured in The Guardian, Vice, Broadly, Tank, and Gay Times, and they were named an LGBT trailblazer by The Dots and one of the voices of now for i-D. Tom also forms half of the radical queer punk band ACM, and is coauthor of Diary of a Drag Queen.
Loading...
or support indie stores by buying on