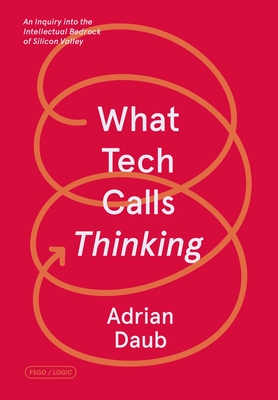 Adrian Daub’s What Tech Calls Thinking is a lively dismantling of the ideas that form the intellectual bedrock of Silicon Valley. Equally important to Silicon Valley’s world-altering innovation are the language and ideas it uses to explain and justify itself. And often, those fancy new ideas are simply old motifs playing dress-up in a hoodie. From the myth of dropping out to the war cry of “disruption,” Daub locates the Valley’s supposedly original, radical thinking in the ideas of Heidegger and Ayn Rand, the New Age Esalen Foundation in Big Sur, and American traditions from the tent revival to predestination. Written with verve and imagination, What Tech Calls Thinking is an intellectual refutation of Silicon Valley's ethos, pulling back the curtain on the self-aggrandizing myths the Valley tells about itself.


Praise For What Tech Calls Thinking: An Inquiry into the Intellectual Bedrock of Silicon Valley (FSG Originals x Logic)…

"There are so many scintillating aperçus in Daub’s book that I gave up underlining . . . It’s energizing to read a book about tech philosophy aimed at thinkers in beater cars and not thought leaders in Teslas . . . In Daub’s hands the founding concepts of Silicon Valley don’t make money; they fall apart . . . . Daub brings a Tocqueville-like perspective to what passes for philosophy in the Valley." --Virginia Heffernan, The New York Times Book Review

"What Tech Calls Thinking is more than the sum of its apothegms. Much of its interest comes from Daub's rapid gauging of the distance between the real stakes of ideas that have been converted into marketing tools and sketchy rationalizations." --Scott McLemee, Inside Higher Ed

"Readers who worry that a discussion of ideas by an academic must involve a hard slog will be pleasantly surprised . . . Delightful proof that getting rich does not make you a deep thinker." --Kirkus (starred review)

"A systematic indictment of the cult of personality and mythmaking of Silicon Valley from a humanities perspective." --Shelf Awareness (starred review)

“What Tech Calls Thinking is intellectual history of the most vital sort, an unstinting experiment in taking the precepts of Silicon Valley seriously. Those precepts suffuse our culture–-“disruption,” “connection,” “genius,” “failing better”-–even as we sense that they do not mean what prominent tech leaders think they do. For those who suspected that Zuckerberg and Musk, Thiel and Jobs were making it up as they went along, Daub has the receipts. By tracing these ideas back to their origins, whether Ayn Rand or Karl Marx, Marshall McLuhan or Timothy Leary, Daub reveals what thin gruel remains in today’s sloganeering. If thought corrupts language, and language corrupts thought, as Orwell argued, What Tech Calls Thinking is an important companion through our corrupt times." --Noam Cohen, author of The Know-It-Alls: The Rise of Silicon Valley as a Political Powerhouse and Social Wrecking Ball

"Adrian Daub airs out Silicon Valley’s smoke and turns over its mirrors in What Tech Calls Thinking. This book is a bright, jaunty work of tech criticism." --Joanne McNeil, author of Lurking

Adrian Daub is a professor of comparative literature and German studies at Stanford University, and the director of Stanford’s Program in Feminist, Gender, and Sexuality Studies. His research focuses on the intersection of literature, music, and philosophy in the nineteenth century, and he is the author of several books published by academic presses. His writing has appeared in The Guardian, The New Republic, n+1, Longreads, and the Los Angeles Review of Books. He lives in San Francisco.
Loading...
or
Not Currently Available for Direct Purchase