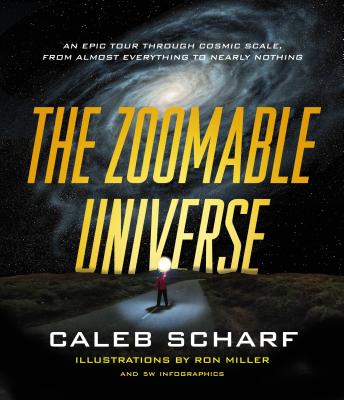 An Epic Tour Through Cosmic Scale, from Almost Everything to Nearly Nothing

An epic, full-color visual journey through all scales of the universe

In The Zoomable Universe, the award-winning astrobiologist Caleb Scharf and the acclaimed artist Ron Miller take us on an epic tour through all known scales of reality, from the largest possible magnitude to the smallest. Drawing on cutting-edge science, they begin at the limits of the observable universe, a scale spanning 10^27 meters—about 93 billion light-years. And they end in the subatomic realm, at 10^-35 meters, where the fabric of space-time itself confounds all known rules of physics. In between are galaxies, stars and planets, oceans and continents, plants and animals, microorganisms, atoms, and much, much more. Stops along the way—all enlivened by Scharf’s sparkling prose and his original insights into the nature of our universe—include the brilliant core of the Milky Way, the surface of a rogue planet, the back of an elephant, and a sea of jostling quarks.

The Zoomable Universe is packed with more than 100 original illustrations and infographics that will captivate readers of every age. It is a whimsical celebration of discovery, a testament to our astounding ability to see beyond our own vantage point and chart a course from the farthest reaches of the cosmos to its subatomic depths—in short, a must-have for the shelves of all explorers.

Caleb Scharf is the director of the Columbia Astrobiology Center. He writes the Life, Unbounded blog for Scientific American; has written for New Scientist, Science, and Nature, among other publications; and has served as a consultant for the Discovery Channel, the Science Channel, The New York Times, and more. Scharf has served as a keynote speaker for the American Museum of Natural History and the Rubin Museum of Art, and is the author of Extrasolar Planets and Astrobiology, winner of the 2011 Chambliss Astronomical Writing Award from the American Astronomical Society. He lives in New York City with his wife and two daughters.

Ron Miller is a Hugo Award–winning illustrator and author whose work has appeared in National Geographic, Scientific American, Smithsonian, the international bestselling app Journey to the Exoplanets, the definitive editions of 20,000 Leagues Under the Sea and Journey to the Center of the Earth, and many other books. He served as the art director for the National Air and Space Museum’s Albert Einstein Planetarium. He lives in Virginia.

Praise For The Zoomable Universe: An Epic Tour Through Cosmic Scale, from Almost Everything to Nearly Nothing…

"A heaping dose of dazzle ... readable, delightful prose with infographics that explain everything from types of matter to types of exoplanets ... Will take your breath away." —Annalee Newitz, Ars Technica

"Beautifully illustrated . . . Scharf and Miller take readers on a spectacular journey, starting in the farthest reaches of the universe and ending in the deepest depths of the atom . . . Miller's stunning illustrations pair perfectly with Scharf's compelling writing, which introduces complex ideas using everyday language and lucid metaphors . . . A superb composite of scientific knowledge that will no doubt inspire readers of all ages to learn more about our enigmatic universe." —Kirkus Reviews (starred review)

"A fantastic journey from the fringes of the visible universe to the heart of the atom . . . [A] book of wonders." —Publishers Weekly (starred review)

"This brilliant author-illustrator collaboration is a worthy, must-have successor to the title that inspired it, the classic Powers of Ten." —Gilbert Taylor, Booklist