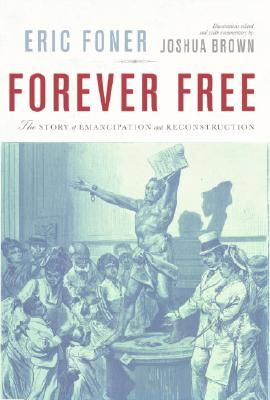 The Story of Emancipation and Reconstruction

From one of our most distinguished historians, a new examination of the vitally important years of Emancipation and Reconstruction during and immediately following the Civil War-a necessary reconsideration that emphasizes the era's political and cultural meaning for today's America.
In "Forever Free, "Eric Foner" "overturns numerous assumptions growing out of the traditional understanding of the period, which is based almost exclusively on white sources and shaped by (often unconscious) racism. He presents the period as a time of determination, especially on the part of recently emancipated black Americans, to put into effect the principles of equal rights and citizenship for all.
Drawing on a wide range of long-neglected documents, he places a new emphasis on the centrality of the black experience to an understanding of the era. We see African Americans as active agents in overthrowing slavery, in helping win the Civil War, and-even more actively-in shaping Reconstruction and creating a legacy long obscured and misunderstood. Foner makes clear how, by war's end, freed slaves in the South built on networks of church and family in order to exercise their right of suffrage as well as gain access to education, land, and employment.
He shows us that the birth of the Ku Klux Klan and renewed acts of racial violence were retaliation for the progress made by blacks soon after the war. He refutes lingering misconceptions about Reconstruction, including the attribution of its ills to corrupt African American politicians and "carpetbaggers," and connects it to the movements for civil rights and racial justice.
Joshua Brown's illustrated commentary on the era's graphic art andphotographs complements the narrative. He offers a unique portrait of how Americans envisioned their world and time.
"Forever Free" is an essential contribution to our understanding of the events that fundamentally reshaped American life after the Civil War-a persuasive reading of history that transforms our sense of the era from a time of failure and despair to a threshold of hope and achievement.
or
Not Currently Available for Direct Purchase
Copyright © 2020 American Booksellers Association