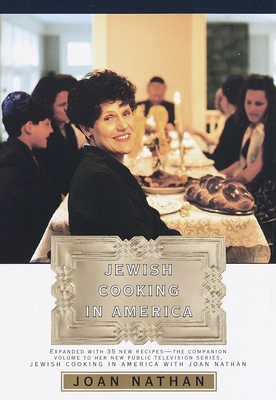 This rich tapestry of more than three centuries of Jewish cooking in America gathers together some 335 kosher recipes, old and new. They come from both Sephardic and Ashkenazic Jews who settled all over America, bringing with them a wide variety of regional flavors, changing and adapting their traditional dishes according to what was available in the new country.

What makes Jewish cooking unique is the ancient dietary laws that govern the selection, preparation, and consumption of observant Jews. Food plays a major part in rituals past and present, binding family and community. It is this theme that informs every part of Joan Nathan’s warm and lively text.

Every dish has a story–from the cholents (the long-cooked rich meat stews) and kugels (vegetable and noodle puddings) prepared in advance for the Sabbath, to the potato latkes (served with maple syrup in Vermont and goat cheese in California) and gefilte fish (made with white fish in the Midwest, salmon in the Northwest, haddock in New England, and shad in Maryland). Joan Nathan tells us how lox and bagels and Lindy’s cheesecake became household words, and how American products like Crisco, cream cheese, and Jell-O changed forever Jewish home cooking.

The recipes and stories come from every part of the U.S.A. They are seasoned with Syrian, Moroccan, Greek, German, Polish, Georgian, and Alsatian flavors, and they represent traditional foods tailored for today’s tastes as well as some of the nouvelle creations of Jewish chefs from New York to Tuscon.

When Jewish Cooking in America was first published in 1994, it won both the IACP / Julia Child Cookbook Award for Best Cookbook of the Year and the James Beard Award for Best Food of the Americas Cookbook. Now, more than ever, it stands firmly established as an American culinary classic.

Joan Nathan was born in Providence, Rhode Island. She graduated from the University of Michigan, where she eventually received a master’s degree in public administration from Harvard University. For three years she lived in Israel, where she worked for Mayor Teddy Kollek of Jerusalem. In New York, she founded the Ninth Avenue Food Festival. Ms. Nathan wrote for the Washington Post for eight years and currently contributes articles on international ethnic food and special holiday features to the New York Times, Food Arts, Gourmet, and the B’nai B’rith International Jewish Monthly. She is the author of An American Folklife Cookbook and coauthor of The Flavor of Jerusalem. Ms. Nathan lives in Washington, D.C., with her husband and their three children.
Loading...
or
Not Currently Available for Direct Purchase