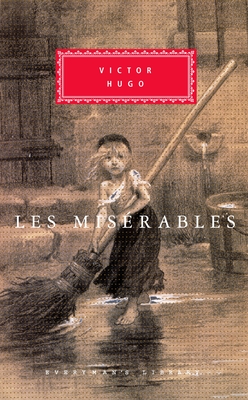 It has been said that Victor Hugo has a street named after him in virtually every town in France. A major reason for the singular celebrity of this most popular and versatile of the great French writers is Les Misérables (1862). In this story of the trials of the peasant Jean Valjean—a man unjustly imprisoned, baffled by destiny, and hounded by his nemesis, the magnificently realized, ambiguously malevolent police detective Javert—Hugo achieves the sort of rare imaginative resonance that allows a work of art to transcend its genre.

Les Misérables is at once a tense thriller that contains one of the most compelling chase scenes in all literature, an epic portrayal of the nineteenth-century French citizenry, and a vital drama—highly particularized and poetic in its rendition but universal in its implications—of the redemption of one human being.

"Hugo's genius was for the creation of simple and recognizable myth. The huge success of Les Misérables as a didactic work on behalf of the poor and oppressed is due to his poetic and myth-enlarged view of human nature." —V. S. Pritchett

"It was Tolstoy who vindicated [Hugo's] early ambition by judging Les Misérables one of the world's great novels, if not the greatest… [His] ability to present the extremes of experience 'as they are' is, in the end, Hugo's great gift." —From the Introduction by Peter Washington

Victor Hugo (1802-85), novelist, poet, playwright, and French national icon, is best known for two of today’s most popular world classics: Les Misérables and The Hunchback of Notre-Dame, as well as other works, including The Toilers of the Sea and The Man Who Laughs. Hugo was elected to the Académie Française in 1841. As a statesman, he was named a Peer of France in 1845. He served in France’s National Assemblies in the Second Republic formed after the 1848 revolution, and in 1851 went into self-imposed exile upon the ascendance of Napoleon III, who restored France’ s government to authoritarian rule. Hugo returned to France in 1870 after the proclamation of the Third Republic.
Loading...
or support indie stores by buying on