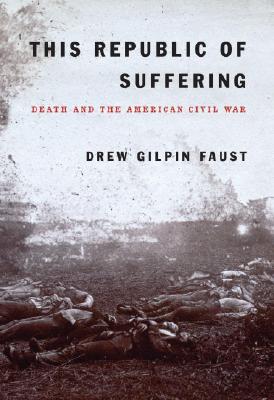 This Republic of Suffering

Death and the American Civil War

An illuminating study of the American struggle to comprehend the meaning and practicalities of death in the face of the unprecedented carnage of the Civil War.
During the war, approximately 620,000 soldiers lost their lives. An equivalent proportion of today's population would be six million." This Republic of Suffering" explores the impact of this enormous death toll from every angle: material, political, intellectual, and spiritual. The eminent historian Drew Gilpin Faust delineates the ways death changed not only individual lives but the life of the nation and its understanding of the rights and responsibilities of citizenship. She describes how survivors mourned and how a deeply religious culture struggled to reconcile the slaughter with its belief in a benevolent God, pondered who should die and under what circumstances, and reconceived its understanding of life after death.
Faust details the logistical challenges involved when thousands were left dead, many with their identities unknown, on the fields of places like Bull Run, Shiloh, Antietam, and Gettysburg. She chronicles the efforts to identify, reclaim, preserve, and bury battlefield dead, the resulting rise of undertaking as a profession, the first widespread use of embalming, the gradual emergence of military graves registration procedures, the development of a federal system of national cemeteries for Union dead, and the creation of private cemeteries in the South that contributed to the cult of the Lost Cause. She shows, too, how the war victimized civilians through violence that extended beyond battlefields from disease, displacement, hardships, shortages, emotional wounds, and conflicts connected to the disintegration of slavery.
Throughout, the voices of soldiers and their families, of statesmen, generals, preachers, poets, surgeons, and nurses, of northerners and southerners, slaveholders and freedpeople, of the most exalted and the most humble are brought together to give us a vivid understanding of the Civil War's most fundamental and widely shared reality.
Were he alive today, " This Republic of Suffering" would compel Walt Whitman to abandon his certainty that the real war will never get in the books.

Praise For This Republic of Suffering: Death and the American Civil War…

Praise for Drew Gilpin Faust’s This Republic of Suffering

“It’s a shattering history of the war, focusing exclusively on death and dying–how Americans prepared for death, imagined it, risked it, endured it and worked to understand it.” —Jon Wiener, LA Times Book Review

“Faust excels in explaining the era’s violent rhetoric and what went on in people’s heads.” —David Waldstreicher, The Boston Globe

“This Republic of Suffering is one of those groundbreaking histories in which a crucial piece of the past, previously overlooked or misunderstood, suddenly clicks into focus.” —Malcolm Jones, Newsweek

“Faust is a first-rate scholar who yanks aside the usual veil of history to look narrowly at life's intimate level for new perspectives from the past. She focuses on ordinary lives under extreme duress, which makes for compelling reading.” —Don Oldenburg, USA Today

“The beauty and originality of Faust’s book is that it shows how thoroughly the work of mourning became the business of capitalism, merchandised throughout a society.” —Adam Gopnik, The New Yorker

“Fascinating, innovative . . . Faust returns to the task of stripping from war any lingering romanticism, nobility or social purpose.” —Eric Foner, The Nation

“This Republic of Suffering is a harrowing but fascinating read.” —Marjorie Kehe, The Christian Science Monitor

“If you read only one book on the Civil War this year, make it this one.” –Kevin M. Levin, American History

“Having always kept the war in her own scholarly sights, Faust offers a compelling reassertion of its basic importance in society and politics alike.” —Richard Wrightman Fox, Slate

“A moving work of social history, detailing how the Civil War changed perceptions and behaviors about death. . . . An illuminating study.” —Kirkus

“Penetrating . . . Faust exhumes a wealth of material . . . to flesh out her lucid account. The result is an insightful, often moving portrait of a people torn by grief.” —Publishers Weekly

“No other generation of Americans has encountered death on the scale of the Civil War generation. This Republic of Suffering is the first study of how people in both North and South coped with this uniquely devastating experience. How did they mourn the dead, honor their sacrifice, commemorate their memory, and help their families? Drew Gilpin Faust’s powerful and moving answers to these questions provide an important new dimension to our understanding of the Civil War.”
—James M. McPherson, author of This Mighty Scourge: Perspectives on the Civil War

“During the Civil War, death reached into the world of the living in ways unknown to Americans before or since. Drew Gilpin Faust follows the carnage in all its aspects, on and off the battlefield. Timely, poignant, and profound, This Republic of Suffering does the real work of history, taking us beyond the statistics until we see the faces of the fallen and understand what it was to live amid such loss and pain.”
—Tony Horowitz, Confederates in the Attic: Dispatches from the Unfinished Civil War

“Drew Gilpin Faust has used her analytical and descriptive gifts to explore how men and women of the Civil War generation came to terms with the conflict’s staggering human toll. Everyone who reads this book will come away with a far better understanding of why the war profoundly affected those who lived through it.”
—Gary W. Gallagher, author of The Confederate War

“Drew Faust’s brilliant new book, This Republic of Suffering, builds profoundly from the opening discussion of the Christian ideal of the good death to the last harrowing chapters on the exhumation, partial identification, reburial and counting of the Union dead. In the end one can only conclude, as the author does, that the meaning of the Civil War lies in death itself: in its scale, relentlessness, and enduring cultural effects. This is a powerful and moving book about our nation’s defining historical encounter with the universal human experience of death.”
—Stephanie McCurry, author of Masters of Small Worlds: Yeoman Households, Gender Relations, and the political culture of the Antebellum South Carolina Low Country

“Whitman was wrong; the real war did get into the books. This is a wise, informed, troubling book. This Republic of Suffering demolishes sentimentalism for the Civil War in a masterpiece of research, realism, and originality.”
—David W. Blight, author of Race and Reunion: The Civil War in American Memory

Drew Gilpin Faust is president of Harvard University, where she also holds the Lincoln Professorship in History. Dean of the Radcliffe Institute for Advanced Study from 2001 to 2007, she came to Harvard after twenty-five years on the faculty of the University of Pennsylvania. She is the author of five previous books, including "Mothers of" "Invention: Women of the Slaveholding South in the American Civil War, " which won the Francis Parkman Prize and the Avery Craven Prize. She and her husband live in Cambridge, Massachusetts.
Loading...
or
Not Currently Available for Direct Purchase