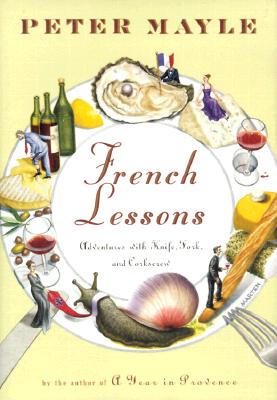 Adventures with Knife, Fork, and Corkscrew

From Peter Mayle, a joyous exploration and celebration of the infinite gastronomic pleasures of France.

Ranging far from his adopted Provence, Mayle now travels to every corner of the country, armed with knife, fork, and corkscrew. He takes us to tiny, out-of-the-way restaurants, starred Michelin wonders, local village markets, annual festivals, and blessed vineyards.

We visit the Foire aux Escargots at Martigny-les-Bains a whole weekend devoted to the lowly but revered snail. We observe the Marathon du Medoc, where runners passing through the great vineyards of Bordeaux refresh themselves en route with tastings of red wine (including Chateau Lafite-Rothschild!). There is a memorable bouillabaisse in a beachside restaurant on the Cute d'Azur. And we go on a search for the perfect chicken that takes us to a fair in Bourg-en-Bresse.

There is a Catholic mass in the village of Ri-cherenches, a sacred event at which thanks are given for the aromatic, mysterious, and breathtakingly expensive black truffle. We learn which is the most pungent cheese in France (it's in Normandy), witness a debate on the secret of the perfect omelette, and pick up a few luscious recipes along the way. There is even an appreciation and celebration of an essential tool for any serious food-lover in France, the Michelin Guide.

"Here we have all the glory and pleasure of the French table in the most satisfying book yet from the toujours delightfully entertaining"
--Peter Mayle.


Praise For French Lessons: Adventures with Knife, Fork, and Corkscrew…

“Delectable . . . as satisfying as a meal in a Michelin-rated three-star restaurant.”–USA Today


“Mayle’s descriptions are as mouth watering as the food he samples.”–Rocky Mountain News

“So evocative you can almost feel the bib tied around his chin and sip the last drop of Bordeaux at the bottom of his glass.” –The Washington Post

“Mayle’s descriptions are as mouth watering as the food he samples. He captures the comic while never depreciating the subject.”–Rocky Mountain News

“Savory, sensual, positively transporting stories about his encounters with Gallic gustatory delights and about his growing appreciation of the central place food occupies in French life…. His descriptions of the meals they serve allow us to practically taste the frog legs and truffles right along with him.”–Booklist

“Whether you’re going to France or just to eat, Mayle is worth reading.”–San Jose Mercury News

“Foodies and Francophiles will discover a like-minded devotee. And all but the strictest vegetarian will be made hungry by this book. Mayle’s form is every bit as good as ever.”–The Associated Press