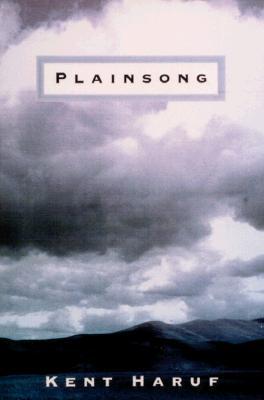 A heartstrong story of family and romance, tribulation and tenacity, set on the High Plains east of Denver.
In the small town of Holt, Colorado, a high school teacher is confronted with raising his two boys alone after their mother retreats first to the bedroom, then altogether. A teenage girl -- her father long since disappeared, her mother unwilling to have her in the house -- is pregnant, alone herself, with nowhere to go. And out in the country, two brothers, elderly bachelors, work the family homestead, the only world they've ever known.

From these unsettled lives emerges a vision of life, and of the town and landscape that bind them together -- their fates somehow overcoming the powerful circumstances of place and station, their confusion, curiosity, dignity and humor intact and resonant. As the milieu widens to embrace fully four generations, Kent Haruf displays an emotional and aesthetic authority to rival the past masters of a classic American tradition.

Utterly true to the rhythms and patterns of life, Plainsong is a novel to care about, believe in, and learn from.

"Kent Haruf's new novel Plainsong is nothing short of a revelation. I don't expect to read a better novel this year. Or next, for that matter."
--Richard Russo

"I read Plainsong in one sitting, unwilling--unable--to look up until I'd finished. Kent Haruf has given us a pure blessing of a book: a novel of such sheer sweet amplitude, grace and humanity."
--Beverly Lowry

"Plainsong is the marvelous story of how seven extraordinary members of a tiny prairie community--two dedicated teachers, two young boys wise beyond their years, a pair of wonderfully idiosyncratic rancher brothers and a pregnant high school girl--come together, in the face of great difficulties, to form the most appealing extended family in contemporary fiction. With Plainsong, Kent Haruf has written an American masterwork: a profound, witty, warmhearted and tough-minded account of a place where family and community still come first. Plainsong is the best new novel I've read since Cold Mountain."
--Howard Frank Mosher

"Plainsong is a beauty, as spare and heartbreaking as an abandoned homestead cabin, always tough but humane, never sentimental. I loved the prose, as bright and hard as the winter sun sparkling off a sandy snowbank, and the characters, scrubbed to their essentials by the extremes of the Great Plains weather. It's a story that draws the reader like a heat mirage."
--James  Crumley

Kent Haruf's The Tie That Binds received a Whiting Foundation Award and a special citation from the PEN/Hemingway Foundation. Also the author of Where You Once Belonged, he lives with his wife, Cathy, in Murphysboro, Illinois, and teaches at Southern Illinois University at Carbondale.
Loading...
or
Not Currently Available for Direct Purchase