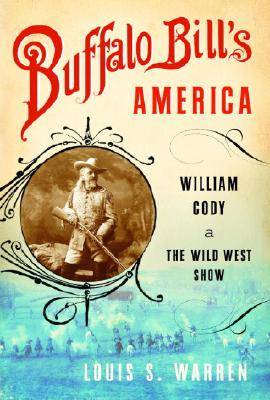 William Cody (1846—1917), a.k.a. Buffalo Bill, was the most famous American of his age. A child of the frontier Great Plains, Cody was renowned as a Pony Express rider, prospector, trapper, Civil War soldier, professional buffalo hunter, Indian fighter, cavalry scout, horseman, dime-novel hero, and actor. But Buffalo Bill’s greatest success was as impresario of the Wild West show, the traveling company of cowboys, Indians, Mexican vaqueros, and others, numbering in the hundreds, with which he toured North America and Europe for more than three decades. As Louis S. Warren reveals, the show company came to represent America itself, its dazzling mix of races sprung from a frontier past, welded into a thrilling performance, and making their way through the world via the modern technologies of railroad, portable electrical generator, telephones, and brilliantly colored publicity–an entrancing vision of the frontier-born, newly mechanized, polyglot United States in the Gilded Age.

Biographers have long disputed whether Cody was a hero or a charlatan. As Warren shows, the question already preoccupied critics and spectators during Cody’s own lifetime. In fact, the savvy entertainer encouraged the dispute by mingling fictional exploits with his not inconsiderable achievements to construct the persona of an ideal frontiersman, a figure who was more controversial than has been commonly understood. At the same time, his show provided a means for rural westerners, including cowboys, cowgirls, and especially Lakota Sioux Indians, to claim a new future for themselves by reenacting a version of the past.

The most comprehensive critical biography of William Cody in more than forty years, Buffalo Bill’s America places America’s most renowned showman in the context of his cultural worlds in the Far West, in the East, and in Europe. A rich and revealing biography and social history of an American cultural icon.

Louis S. Warren is W. Turrentine Jackson Professor of Western U.S. History at the University of California, Davis. He is the author of" The Hunter's Game: Poachers and Conservationists in Twentieth-Century America, " which won the Western Heritage Award for Outstanding Nonfiction Book, 1998, awarded by the National Cowboy Hall of Fame and Western Heritage Center.
or
Not Currently Available for Direct Purchase
Copyright © 2020 American Booksellers Association