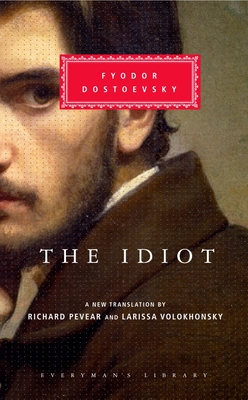 In The Idiot, the saintly Prince Myshkin returns to Russia from a Swiss sanatorium and finds himself a stranger in a society obsessed with wealth, power, and sexual conquest. He soon becomes entangled in a love triangle with a notorious kept woman, Nastasya, and a beautiful young girl, Aglaya. Extortion and scandal escalate to murder, as Dostoevsky’s “positively beautiful man” clashes with the emptiness of a society that cannot accommodate his innocence and moral idealism. The Idiot is both a powerful indictment of that society and a rich and gripping masterpiece.

From award-winning translators, a masterful new translation–never before published–of the novel in which Fyodor Dostoevsky set out to portray a truly beautiful soul.

His prison experiences coupled with his conversion to a profoundly religious philosophy formed the basis for his great novels. But it was his fortuitous marriage to Anna Snitkina, following a period of utter destitution brought about by his compulsive gambling, that gave Dostoevsky the emotional stability to complete Crime and Punishment (1866), The Idiot (1868-69), The Possessed (1871-72),and The Brothers Karamazov (1879-80). When Dostoevsky died in 1881, he left a legacy of masterworks that influenced the great thinkers and writers of the Western world and immortalized him as a giant among writers of world literature.

Praise for previous translations by Richard Pevear and Larissa Volokhonsky, winners of the PEN/Book-of-the-Month Club Prize:

Demons
“The merit in this edition of Demons resides in the technical virtuosity of the translators…They capture the feverishly intense, personal explosions of activity and emotion that manifest themselves in Russian life.” –New York Times Book Review