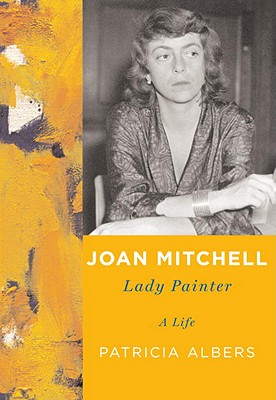 Gee, Joan, if only you were French and male and dead. New York art dealer to Joan Mitchell, the 1950s
She was a steel heiress from the Midwest Chicago and Lake Forest (her grandfather built Chicago's bridges and worked for Andrew Carnegie). She was a daughter of the American Revolution Anglo-Saxon, Republican, Episcopalian.
She was tough, disciplined, courageous, dazzling, and went up against the masculine art world at its most entrenched, made her way in it, and disproved their notion that women couldn t paint.
"
Joan Mitchell "is the first full-scale biography of the abstract expressionist painter who came of age in the 1950s, 60s, and 70s; a portrait of an outrageous artist and her struggling artist world, painters making their way in the second part of America's twentieth century.
As a young girl she was a champion figure skater, and though she lacked balance and coordination, accomplished one athletic triumph after another, until giving up competitive skating to become a painter.
Mitchell saw people and things in color; color and emotion were the same to her. She said, I use the past to make my pic tures] and I want all of it and even you and me in candlelight on the train and every lover I ve ever had every friend nothing closed out. It's all part of me and I want to confront it and sleep with it the dreams and paint it.
Her work had an unerring sense of formal rectitude, daring, and discipline, as well as delicacy, grace, and awkwardness.
Mitchell exuded a young, smoky, tough glamour and was thought of as sexy as hell.
Albers writes about how Mitchell married her girlhood pal, Barnet Rosset, Jr. scion of a financier who was head of Chicago's Metropolitan Trust and partner of Jimmy Roosevelt. Rosset went on to buy Grove Press in 1951, at Mitchell's urging, and to publish Henry Miller, Samuel Beckett, Jean Genet, Jack Kerouac, Allen Ginsberg, et al., making Grove into the great avant-garde publishing house of its time.
Mitchell's life was messy and reckless: in New York and East Hampton carousing with de Kooning, Frank O Hara, James Schuyler, Jane Freilicher, Franz Kline, Helen Frankenthaler, and others; going to clambakes, cocktail parties, softball games and living an entirely different existence in Paris and Vetheuil.
Mitchell's inner life embraced a world beyond her own craft, especially literature . . . her compositions were informed by imagined landscapes or feelings about places.
In" Joan Mitchell," Patricia Albers brilliantly reconstructs the painter's large and impassioned life: her growing prominence as an artist; her marriage and affairs; her friendships with poets and painters; her extraordinary work.
"
Joan Mitchell" re-creates the times, the people, and her worlds from the 1920s through the 1990s and brings it all spectacularly to life.


"Patricia Albers vividly chronicles the artist’s journey from her wealthy upbringing in Chicago to her defiant student days at Smith College, and as a young painter at the Art Institute of Chicago. . . Vibrantly written and carefully researched. . . Albers constructs a fluid, energetic narrative of Mitchell’s complicated life and work."
—Publishers Weekly

Patricia Albers is the author of "Shadows, Fire, Snow: The Life of Tina Modotti."" "Her articles have appeared in newspapers, art journals, and museum catalogs. She has curated many exhibitions, among them Tina Modotti and the Mexican Renaissance. She lives in Mountain View, California.
Loading...
or
Not Currently Available for Direct Purchase