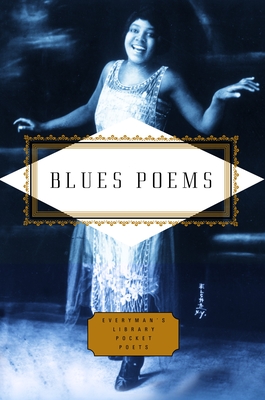 Born in African American work songs, field hollers, and the powerful legacy of the spirituals, the blues traveled the country from the Mississippi delta to “Sweet Home Chicago,” forming the backbone of American music. In this anthology–the first devoted exclusively to blues poems–a wide array of poets pay tribute to the form and offer testimony to its lasting power.

The blues have left an indelible mark on the work of a diverse range of poets: from “The Weary Blues” by Langston Hughes and “Funeral Blues” by W. H. Auden, to “Blues on Yellow” by Marilyn Chin and “Reservation Blues” by Sherman Alexie. Here are blues-influenced and blues-inflected poems from, among others, Gwendolyn Brooks, Allen Ginsberg, June Jordan, Richard Wright, Nikki Giovanni, Charles Wright, Yusef Komunyakaa, and Cornelius Eady. And here, too, are classic song lyrics–poems in their own right–from Bessie Smith, Robert Johnson, Ma Rainey, and Muddy Waters.

The rich emotional palette of the blues is fully represented here in verse that pays tribute to the heart and humor of the music, and in poems that swing with its history and hard-bitten hope.

KEVIN YOUNG is the author of ten books of poetry, including Book of Hours, winner of the Lenore Marshall Poetry Prize from the Academy of American Poets and a finalist for the Kingsley Tufts Award; Ardency: A Chronicle of the Amistad Rebels, winner of a 2012 American Book Award; and Jelly Roll: A Blues, a finalist for the National Book Award. He is also the editor of The Hungry Ear: Poems of Food & Drink and seven other collections. His book The Grey Album: On the Blackness of Blackness won the Graywolf Nonfiction Prize, was a New York Times Notable Book and a finalist for the National Book Critics Circle Award for criticism, and won the PEN Open Book Award. He is currently the Charles Howard Candler Professor of Creative Writing and English and curator of both Literary Collections and the Raymond Danowski Poetry Library at Emory University.
Loading...
or support indie stores by buying on
(This book is on backorder)