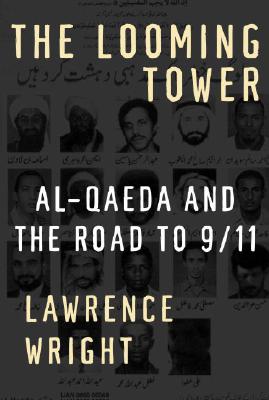 A sweeping narrative history of the events leading to 9/11, a groundbreaking look at the people and ideas, the terrorist plans and the Western intelligence failures that culminated in the assault on America. Lawrence Wright’s remarkable book is based on five years of research and hundreds of interviews that he conducted in Egypt, Saudi Arabia, Pakistan, Afghanistan, Sudan, England, France, Germany, Spain, and the United States.

The Looming Tower achieves an unprecedented level of intimacy and insight by telling the story through the interweaving lives of four men: the two leaders of al-Qaeda, Osama bin Laden and Ayman al-Zawahiri; the FBI’s counterterrorism chief, John O’Neill; and the former head of Saudi intelligence, Prince Turki al-Faisal.

As these lives unfold, we see revealed: the crosscurrents of modern Islam that helped to radicalize Zawahiri and bin Laden . . . the birth of al-Qaeda and its unsteady development into an organization capable of the American embassy bombings in Kenya and Tanzania and the attack on the USS Cole . . . O’Neill’s heroic efforts to track al-Qaeda before 9/11, and his tragic death in the World Trade towers . . . Prince Turki’s transformation from bin Laden’s ally to his enemy . . . the failures of the FBI, CIA, and NSA to share intelligence that might have prevented the 9/11 attacks.

The Looming Tower broadens and deepens our knowledge of these signal events by taking us behind the scenes. Here is Sayyid Qutb, founder of the modern Islamist movement, lonely and despairing as he meets Western culture up close in 1940s America; the privileged childhoods of bin Laden and Zawahiri; family life in the al-Qaeda compounds of Sudan and Afghanistan; O’Neill’s high-wire act in balancing his all-consuming career with his equally entangling personal life—he was living with three women, each of them unaware of the others’ existence—and the nitty-gritty of turf battles among U.S. intelligence agencies.

Brilliantly conceived and written, The Looming Tower draws all elements of the story into a galvanizing narrative that adds immeasurably to our understanding of how we arrived at September 11, 2001. The richness of its new information, and the depth of its perceptions, can help us deal more wisely and effectively with the continuing terrorist threat.

“Powerful and important . . . a history of a man and a movement, replete with the accidents of history and historic inevitability.” —Kevin Horrigan, St. Louis Post-Dispatch

“Don’t read The Looming Tower in bed. This book requires a straight spine and full attention . . . The reporting is so good that it will matter in 100 years. Wright’s determined, disciplined work has made his book indispensable. “ —Karen Long, The Plain Dealer

“A page-turner . . . encompassing religion, politics, economics and more. If you’ve been meaning to sharpen your understanding of what all led up to September 11, 2001, then Wright may have written just what you’ve been waiting for.” —Tom Gallagher, San Francisco Chronicle

“Brilliant . . . describes the contorted intellectual journey that has taken place among some Muslims which allows a holy book that appears to condemn suicide and the killing on innocents to be used to justify catastrophic terrorism.” —Stephen Fidler, Financial Times

“What a riveting tale Lawrence Wright fashions in this marvelous book.  ‘The Looming Tower’ is not just a detailed, heart-stopping account of the events leading up to 9/11, written with style and verve.  [It’s] a thoughtful examination of the world that produced the men who brought us 9/11, and of their progeny who bedevil us today.   The portrait of John O’Neill, the driven, demon-ridden F.B. I. agent who worked so frantically to stop Osama bin Laden, only to perish in the attack on the World Trade Center, is worth the price of the book alone.   ‘The Looming Tower’ is a thriller.  And it’s a tragedy, too.”
–Dexter Filkins, The New York Times Book Review cover

“Dozens of intricately reported books about 9/11 are already available; I had read perhaps half of them [before] starting The Looming Tower. But Lawrence Wright’s book is my new touchstone. None of the previous books led me to say ‘Aha, now I think I understand’ as frequently.”
—Steve Weinberg, The Boston Globe

“A searing view of the tragic events of September 11, 2001, a view that is at once wrenchingly intimate and boldly sweeping in its historical perspective . . . a narrative history that possesses all the immediacy and emotional power of a novel, an account that indelibly illustrates how the political and the personal, the public and the private were often inextricably intertwined.”
–Michiko Kakutani, The New York Times

“Important, gripping . . . One of the best books yet on the history of terrorism.”
—Publishers Weekly, starred review

“Lawrence Wright provides a graceful and remarkably intimate set of portraits of the people who brought us 9/11. It is a tale of extravagant zealotry and incessant bumbling that would be merely absurd if the consequences were not so grisly.”
—Gary Sick

"Lawrence Wright's integrity and diligence as a reporter shine through every page of this riveting narrative."
—Robert A. Caro

“A towering achievement. One of the best and more important books of recent years. Lawrence Wright has dug deep into and written well a story every American should know. A masterful combination of reporting and writing.”
—Dan Rather

“Comprehensive and compelling…Wright has written what must be considered a definitive work on the antecedents to 9/11…Essential for an understanding of that dreadful day.”
--starred Kirkus review

Lawrence Wright graduated from Tulane University and spent two years teaching at the American University in Cairo, Egypt. He is a staff writer for The New Yorker and a fellow at the Center on Law and Security at New York University School of Law. The author of five works of nonfiction—City Children, Country Summer; In the New World; Saints and Sinners; Remembering Satan; and Twins—he has also written a novel, God’s Favorite, and was cowriter of the movie The Siege. He and his wife are longtime residents of Austin, Texas.
Loading...
or
Not Currently Available for Direct Purchase