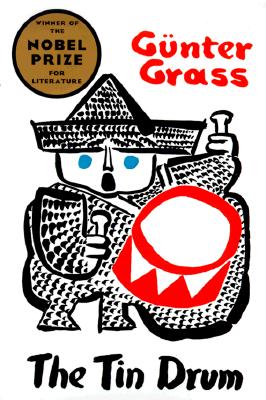 The greatest German novel since the end of World War II, The Tin Drum is the autobiography of Oskar Matzerath, thirty years old, detained in a mental hospital, convicted of a murder he did not commit.  On the day of his third birthday, Oskar had "declared, resolved, and determined [to] stop right there, remain as I was, stay the same size, cling to the same attire" (striped pullover and patent-leather shoes).  That same day Oskar receives his first tin drum, and from then on it is the means of his expression, allowing him to draw forth memories from the past as well as judgments about the horrors, injustices, and eccentricities he observes through the long nightmare of the Nazi era.  As that era ebbs bloodily away, as drum succeeds drum, Oskar participates in the German postwar economic miracle -- working variously in the black market, as an artist's model, in a troupe of traveling musicians.
With the onset of affluence and fame, Oskar decides to grow a few inches, only to develop a humpback.  But despite his newfound status (and stature), Oskar remains haunted by the deaths of his parents, afflicted by his responsibility for past sins -- and so assumes guilt for a murder he did not commit as an act of atonement and an opportunity to find consolation.The rhythms of Oskar's drums are intricate and insistent, and they lead us, often by way of shocking fantasies, through the dark forest of German history.  Through Oskar's piercing, outspoken voice and deformed little figure, through the imaginative distortion and exaggeration of historical experience, a pathetically hilarious yet startlingly true portrayal of the human situation comes into view.


Praise For The Tin Drum…