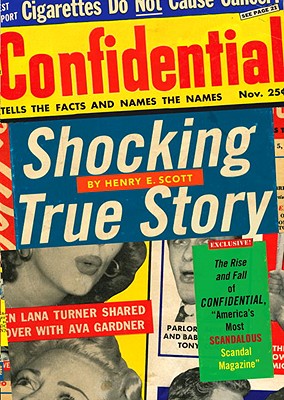 The Rise and Fall of Confidential, "America's Most Scandalous Scandal Magazine"

Humphrey Bogart said of Confidential: “Everybody reads it but they say the cook brought it into the house” . . . Tom Wolfe called it “the most scandalous scandal magazine in the history of the world” . . . Time defined it as “a cheesecake of innuendo, detraction, and plain smut . . . dig up one sensational ‘fact,’ embroider it for 1,500 to 2,000 words. If the subject thinks of suing, he may quickly realize that the fact is true, even if the embroidery is not.”

Here is the never-before-told tale of Confidential magazine, America’s first tabloid, which forever changed our notion of privacy, our image of ourselves, and the practice of journalism in America.

The magazine came out every two months, was printed on pulp paper, and cost a quarter. Its pages were filled with racy stories, sex scandals, and political exposés. It offered advice about the dangers of cigarettes and advocated various medical remedies. Its circulation, at the height of its popularity, was three million. It was first published in 1952 and took the country by storm.

Readers loved its lurid red-and-yellow covers; its sensational stories filled with innuendo and titillating details; its articles that went far beyond most movie magazines, like Photoplay and Modern Screen, and told the real stories such trade publications as Variety and the Hollywood Reporter couldn’t, since they, and the movie magazines, were financially dependent on—or controlled by—the Hollywood studios.

In Confidential’s pages, homespun America was revealed as it really was: our most sacrosanct movie stars and heroes were exposed as wife beaters (Bing Crosby), homosexuals (Rock Hudson and Liberace), neglectful mothers (Rita Hayworth), sex obsessives (June Allyson, the cutie with the page boy and Peter Pan collar), mistresses of the rich and dangerous (Kim Novak, lover of Ramfis Trujillo, playboy son of the Dominican Republic dictator).

We see the two men at the magazine’s center: its founder and owner, Robert Harrison, a Lithuanian Jew from New York’s Lower East Side who wrote for The New York Graphic and published a string of girlie magazines, including Titter, Wink, and Flirt (Bogart called the magazine’s founder and owner the King of Leer) . . . and Confidential ’s most important editor: Howard Rushmore, small-town boy from a Wyoming homestead; passionate ideologue; former member of the Communist Party who wrote for the Daily Worker, renounced his party affiliation, and became a virulent Red-hunter; close pal of FBI director J. Edgar Hoover and expert witness before the House Committee on Un-American Activities, naming the names of actors and writers Rushmore claimed had been Communists and fellow travelers.

Henry Scott writes the story of two men, who out of their radically different pasts and conflicting obsessions, combined to make the magazine the perfect confluence of explosive ingredients that reflected the America of its time, as the country struggled to reconcile Hollywood’s blissful fantasy of American life with the daunting nightmare of the nuclear age . . .


Praise For Shocking True Story: The Rise and Fall of Confidential, "America's Most Scandalous Scandal Magazine"…

“Revealing. . . Scott finds the perfect length to capture the absurdity and significance of Confidential without wallowing in the dirt and hatred it peddled.”
—Jeffrey Westhoff, Chicago Sun-Times

Henry E. Scott grew up in Fayetteville, North Carolina, and is a graduate of the University of North Carolina at Chapel Hill. Scott, a former journalist, is a media consultant and the head of an executive search firm. He lives in New York City.