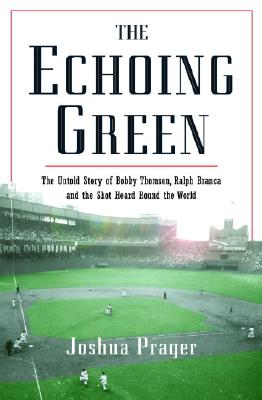 The Untold Story of Bobby Thomson, Ralph Branca and the Shot Heard Round the World

The 1951 regular season was as good as over. The Brooklyn Dodgers led the New York Giants by three runs with just three outs to go in their third and final playoff game. And not once in major league baseball’s 278 preceding playoff and World Series games had a team overcome a three-run deficit in the ninth inning. But New York rallied, and at 3:58 p.m. on October 3, 1951, Bobby Thomson hit a home run off Ralph Branca. The Giants won the pennant.

The Echoing Green follows the reverberations of that one moment–the Shot Heard Round the World–from the West Wing of the White House to the Sing Sing death house to the Polo Grounds clubhouse, where a home run forever turned hitter and pitcher into hero and goat.

It was also in that centerfield block of concrete that, after the home run, a Giant coach tucked away a Wollensak telescope. The spyglass would remain undiscovered until 2001, when, in the jubilee of that home run, Joshua Prager laid bare on the front page of the Wall Street Journal a Giant secret: from July 20, 1951, through the very day of that legendary game, the orange and black stole the finger signals of opposing catchers.

The Echoing Green places that revelation at the heart of a larger story, re-creating in extravagant detail the 1951 pennant race and illuminating as never before the impact of both a moment and a long-guarded secret on the lives of Bobby Thomson and Ralph Branca.

A wonderfully evocative portrait of the great American pastime, The Echoing Green is baseball history, social history and biography–irresistible reading from any angle.


Praise For The Echoing Green: The Untold Story of Bobby Thomson, Ralph Branca and the Shot Heard Round the World…


Starred Review. Say it ain't so, Leo: an iconoclastic, most penetrating look at a famed 1951 clash between the New York Giants and the Brooklyn Dodgers.

Both teams long ago "deserted New York together," remarks Wall Street Journal writer Prager, yielding existential trauma yet unhealed. Well before leaving, on Oct. 3, 1951, their storied rivalry played itself to perfection in a pennant race to end all pennant races, "deadlocked after 156 games, seven innings and six months." It was, Prager writes, something that adults of a certain age would remember as surely as they did the death of JFK or FDR: Dodger Ralph Branca fires a fastball, Giant Bobby Thomson steps forward to swat it out of the park halfway to the moon, the Giants win. The moment is instantly celebrated as the greatest moment in baseball history, immortalized in novels by Philip Roth and Don DeLillo, in The Godfather and The Simpsons. Problem was, as Prager revealed on the 50th anniversary of the grand smack, Giants manager Leo Durocher, of fabulously foul mouth ("I never saw a fucking ball get out of a fucking ball park as fucking fast in my fucking life," he said of one Willie Mays homer), had stolen signals, employing spies with a telescope to suss out what the opposition was planning next. Durocher wasn't even the most masterful signal-stealer in the business, and it happened all the time, but he was also a gambler so profoundly compromised as to make Pete Rose look like a Brownie, and some writers have suggested that he be booted from the Hall of Fame for it. The whole affair was a black smudge on the game–and, as Prager patiently reveals, a dirty and tragic secret that would haunt both Thomson and Branca for decades to come.

A masterful blend of journalism, sports history, social history and even literature: one of the best baseball books to appear in a long time.
-- Copyright ©2006, Kirkus Associates, LP. All rights reserved.

“For anyone, like me, who followed baseball during the golden age portrayed here, this wonderful book is an absolute treasure. But it is far more than a book about baseball; it is a beautifully rendered story about the relationship between two men whose lives became permanently intertwined in a matter of minutes one October day more than half a century ago. A master storyteller, Prager captures the reader from beginning to end.”
–Doris Kearns Goodwin, author of A Team of Rivals

“Through diligent, painstaking and persistent research, Joshua Prager brings the 1951 pennant race to life in The Echoing Green. He adds Tabasco to the story by charging that the Giants were stealing signs at the Polo Grounds and that Thomson knew what Ralph Branca was about to throw him–a mediocre fast ball. This is juicy stuff and Prager's portrait of the time and the people in it is quite splendid.”
–Roger Kahn, author of The Boys of Summer

“Down-slope from Coogan's Bluff, the hollowed, hallowed ground on which Thomson bested Branca, the intrepid and indefatigable reporter Joshua Prager has revealed the dark side of the miracle.”
–Nicholas Dawidoff, author of The Catcher was a Spy


“The Echoing Green is an intriguing, groundbreaking, and always riveting story of one of the greatest games ever played and its aftermath. A terrific read.”
–Kevin Baker, author of Paradise Alley