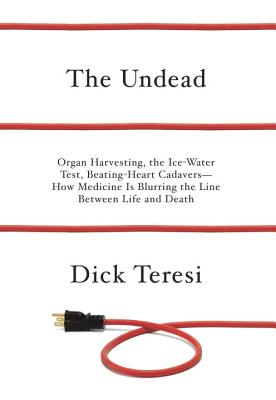 Organ Harvesting, the Ice-Water Test, Beating-Heart Cadavers--How Medicine Is Blurring the Line Between Life and Death

Important and provocative, The Undead examines why even with the tools of advanced technology, what we think of as life and death, consciousness and nonconsciousness, is not exactly clear and how this problem has been further complicated by the business of organ harvesting.

Dick Teresi, a science writer with a dark sense of humor, manages to make this story entertaining, informative, and accessible as he shows how death determination has become more complicated than ever. Teresi introduces us to brain-death experts, hospice workers, undertakers, coma specialists and those who have recovered from coma, organ transplant surgeons and organ procurers, anesthesiologists who study pain in legally dead patients, doctors who have saved living patients from organ harvests, nurses who care for beating-heart cadavers, ICU doctors who feel subtly pressured to declare patients dead rather than save them, and many others. Much of what they have to say is shocking. Teresi also provides a brief history of how death has been determined from the times of the ancient Egyptians and the Incas through the twenty-first century. And he draws on the writings and theories of celebrated scientists, doctors, and researchers--Jacques-Benigne Winslow, Sherwin Nuland, Harvey Cushing, and Lynn Margulis, among others--to reveal how theories about dying and death have changed. With The Undead, Teresi makes us think twice about how the medical community decides when someone is dead.

Dick Teresi is the coauthor of The God Particle and the author of Lost Discoveries: The Ancient Roots of Modern Science, both selected as New York Times Book Review Notable Books. He has been the editor in chief of Science Digest, Longevity, VQ, and Omni, and has written for The New York Times, The Wall Street Journal, and The Atlantic, among other publications.

Praise For The Undead: Organ Harvesting, the Ice-Water Test, Beating-Heart Cadavers--How Medicine Is Blurring the Line Between Life and Death…

“An indefatigable researcher and fluid writer, Mr. Teresi provides a good long riff on death past and present.”
—The New York Times

"The moment of death, suggests science writer Dick Teresi, is harder to pin down than ever...Charting historical definitions of death, the thinking of research greats and debates over near-death experiences, Teresi notes that the ethical challenges are immense, asking, for instance, whether all organ donors are unrevivable."
—Nature

“Like a real-life version of Robin Cook’s medical thriller Coma, Teresi paints a grisly picture of organ harvesting and raises uncomfortable questions: Is the donor actually dead rather than at the point of death? Might he or she be revived given time and proper medical attention? …Provocative… [An] examination of important ethical issues and the still-unresolved question of what constitutes death.”
—The Kirkus Review

“Reading Dick Teresi’s book is like discovering that your college class has been hijacked by the spitball-lobbing kid in the back row—and that the kid is twice as smart as the prof ever was. Taking on biologists, philosophers, and the medical establishment, Teresi zestfully skewers our confused thinking about life, death, and the states in between. The Undead is a rarity: a superserious examination of a profound subject that is a pleasure to read.”
—Charles C. Mann, author of 1493 and 1491

“As I was pulled into this startling, informative account of death-defying and death-defining, I couldn’t help putting a checkmark in the margin next to every line that made me gasp—or laugh—or marvel at Dick Teresi’s bold, inimitable reporting style. On some pages I made as many as four checkmarks. The book left me reeling at the welter of uncertainty that surrounds the certainty of death.”
—Dava Sobel, author of Longitude and A More Perfect Heaven