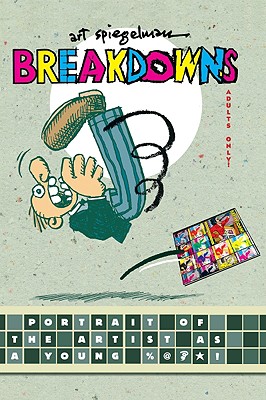 Portrait of the Artist as a Young %@&*! (Pantheon Graphic Library)

The creator of the Pulitzer Prize-winning Maus explores the comics form...and how it formed him!

This book opens with Portrait of the Artist as a Young %@&*!, creating vignettes of the people, events, and comics that shaped Art Spiegelman. It traces the artist's evolution from a MAD-comics obsessed boy in Rego Park, Queens, to a neurotic adult examining the effect of his parents' memories of Auschwitz on his own son.

The second part presents a facsimile of Breakdowns, the long-sought after collection of the artist's comics of the 1970s, the book that triggers these memories. Breakdowns established the mode of formally sophisticated comics that transformed the medium, and includes the prototype of Maus, cubist experiments, an essay on humor, and the definitive genre-twisting pulp story "Ace Hole-Midget Detective."

Pulling all this together is an illustrated essay that looks back at the sixties as the artist pushes sixty, and explains the obsessions that brought these works into being. Poignant, funny, complex, and innovative, Breakdowns alters the terms of what can be accomplished in a memoir.

Perhaps best known for his masterful Holocaust narratives Maus and Maus II– which in 1992 won a Pulitzer Prize–Art Spiegelman is one of the world's best known and beloved comic artists.

Born in Stockholm in 1948, Spiegelman rejected his parents’ aspirations for him to become a dentist, and began to study cartooning in high school and drawing professionally at age 16. He went on to study art and philosophy at Harpur College before joining the underground comics movement. As creative consultant for Topps Candy from 1965-1987, Spiegelman designed Wacky Packages, Garbage Pail Kids and other novelty items, and taught history and aesthetics of comics at the School for Visual Arts in New York from 1979-1986. In 1980, Spiegelman founded RAW, the acclaimed avant-garde comics magazine, with his wife, Françoise Mouly. His work has since been published in many periodicals, including The New Yorker, where he was a staff artist and writer from 1993-2003. He has since published a children’s book entitled Open Me… I’m A Dog, as well as the illustration accompaniment to the 1928 book The Wild Party, by Joseph Moncure March.

Spiegelman is the author, most recently, of In the Shadow of No Towers. He is the recipient of a Guggenheim fellowship, and, in addition to the winning the Pulitzer Prize, Maus was nominated for a National Book Critics' Circle Award. His drawings and prints have been widely exhibited here and abroad. He lives in New York City with his wife and their two children.
Loading...
or support indie stores by buying on