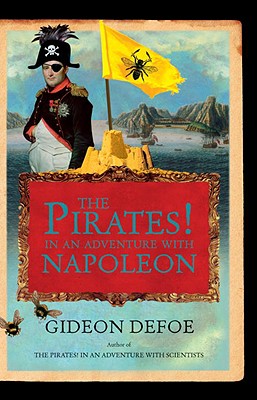 The Pirates! In an Adventure with Napoleon

The Pirate Captain and his merry band of ne’er-do-wells face off against their toughest—but by no means their tallest—challenge yet.

Crushed with disappointment at the Pirate of the Year Awards, our Pirate Captain decides that it’s time for a career change. And so with his loyal (if soon-to-be-dismayed) crew, he sets off for St. Helena, a bleak speck of an Atlantic island a thousand miles from anywhere. But the Captain’s plan for a quiet island life of beekeeping (yes, beekeeping) is interrupted by the arrival of a new “visitor” to the island—the recently deposed Napoleon Bonaparte. Will the island’s twenty-eight-mile circumference be big enough to contain two of history’s greatest egos? Has the Pirate Captain finally met his match? And, lest we forget the most important question: which of them has the best hat?

The Pirates! In an Adventure with Napoleon is a swashbuckling tale of lavish tea parties, planning regulations, educational museum exhibits, and naked political ambition. And—unlike all of its thrilling predecessors—there is not much ham involved.