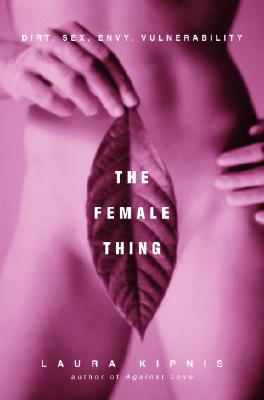 In the female psyche nowadays, “contradictions speckle the landscape, like ingrown hairs after a bad bikini wax.” So writes Laura Kipnis, author of the widely acclaimed polemic Against Love. With “the gleeful viperish wit of Dorothy Parker” (Slate), Kipnis now offers a fresh and provocative assessment of the female condition in the post-post-feminist world of the twenty-first century. For every advance toward sexual equality on the part of women in recent years, she argues, some new impediment just “seems” to appear. Ironically, feminism ran up against an unanticipated opponent: the inner woman.

An ambitious and original reassessment of feminism and women’s ambivalence about it, The Female Thing brims with bracing and funny social observations informed by psychological acuity. For all the upbeat “You go, girl” slogans, women remain caught between feminism and femininity, between self-affirmation and an endless quest for self-improvement, between playing the injured party and claiming independence. Feminism is bedeviled by the same impasses and contradictions it seeks to rectify. But rather than blaming the usual suspects–men, the media–Kipnis takes a hard look at culprits closer to home, namely women themselves and their complicity in upholding male privilege, even as they resent men deeply for it. Which makes relations between the sexes rather thorny at the moment, and Kipnis serves up the gory details of the mutual displeasure between men and women in painfully hilarious detail.

In the tradition of The Feminine Mystique and The Female Eunuch, this is a pathbreaking work. As audacious as it is historically and socially grounded, The Female Thing explores age-old quandaries: the war between the sexes, what women “really” want, and to what extent anatomy is destiny after all.

Praise for Against Love

“Engagingly acerbic [and] extremely funny . . . A deft indictment of the marital ideal, as well as a celebration of the dissent that constitutes adultery, delivered in pointed daggers of prose.”
–The New Yorker

“[Kipnis is] a talented social satirist.”
–The Weekly Standard

“Kipnis’s treatise reads like a brisk, sophisticated novel about the beginning, middle, and end of an adulterous affair . . . [A] bravura book.”
–Times Literary Supplement (London)

“Ragingly witty, yet contemplative . . . Kipnis combines portions of the slashing sexual contrarianism of Norman Mailer, the scathing antidomestic wit of early Roseanne Barr, and the coolly analytical aesthetics of early Susan Sontag . . . A razor-sharp intelligence and a gleeful sense of irony.”
–Publishers Weekly

“Reading Against Love, I felt invigorated half the time and plunged into the deepest, most morose pit of self-pitying despair the rest of it–in other words, I felt as if I were in love.”
–Salon