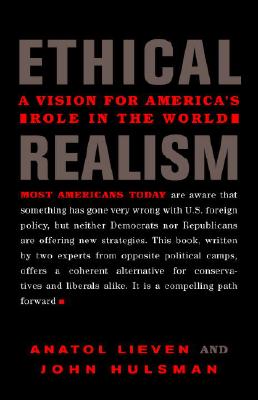 A Vision for America's Role in the World

America today faces a world more complicated than ever before, but both political parties have failed to envision a foreign policy that addresses our greatest threats. As a result, the United States risks lurching from crisis to crisis. In Ethical Realism, Anatol Lieven and John Hulsman, two distinguished policy experts from different political camps, have joined forces to write an impassioned manifesto that illuminates a new way forward.

Rather than blindly asserting a mixture of American power and the transformative effects of democracy, Lieven and Hulsman call for a foreign policy that recognizes America’s real strengths and weaknesses, and those of other nations. They explain how the United States can successfully combine genuine morality with tough and practical common sense.

To achieve these goals, Lieven and Hulsman emphasize the core principles of the American tradition of ethical realism, as set out by Reinhold Niebuhr, Hans Morgenthau, and George Kennan: prudence, patriotism, responsibility, humility, and a deep understanding of other nations. They show how this spirit informed the strategies of Harry Truman and Dwight Eisenhower in the early years of the Cold War and how these presidents were able to contain Soviet expansionism while rejecting the pressure for disastrous preventive wars a threat that has returned since 9/11.

Drawing on this philosophy and these historical lessons, Lieven and Hulsman provide a set of concrete proposals for tackling the problems we face today, including the terrorist threat, Iran, Russia, the Middle East, and China. Their arguments are intended to establish American global power on a more limited but much firmer basis, with greater international support. Both morally stirring and deeply practical, this book shows us how to strengthen our national security, pursue our national interests, and restore American leadership in the world.

Praise For Ethical Realism: A Vision for America's Role in the World…

“One does not need to agree with all recommendations included in Ethical Realism to fully share the authors’ appeal for honestly and pragmatically defining U.S. foreign policy priorities. The book makes a powerful case that the United States needs a foreign policy based on hard facts and what we can achieve with our available resources, in order not to retreat from a U.S. world role, but, on the contrary, ‘to live up to its glorious national promise.’”
–General Brent Scowcroft, former national security adviser

“A profoundly necessary alternative to the arrogance of preemptive warfare. In an age of ideological polarization, an international policy of ethical realism put forward by authors with roots in both progressive idealism and conservative realism has been desperately needed. Ethical Realism is characterized by prudence, humility, understanding, responsibility, and genuine patriotism, and is deeply rooted in the best of America’s history.”
–Senator Gary Hart

“A superb and courageous analysis of U.S. foreign policy challenges and options. The authors’ call for a ‘revolutionary shift in U.S. structures and priorities’ is on target for the United States to be able to exercise effective global leadership. The study demonstrates why messianic pretensions shared by some on the right and the left alike are neither realistic nor ethical and only endanger America without promoting true national interests.”
–Dmitri K. Simes, president of The Nixon Center and publisher of The National Interest