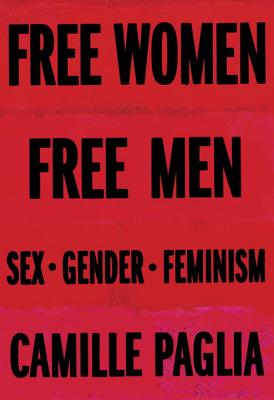 From the fiery intellectual provocateur— and one of our most fearless advocates of gender equality—a brilliant, urgent essay collection that both celebrates modern feminism and challenges us to build an alliance of strong women and strong men.

Ever since the release of her seminal first book, Sexual Personae, Camille Paglia has remained one of feminism’s most outspoken, independent, and searingly intelligent voices. Now, for the first time, her best essays on the subject are gathered together in one concise volume. Whether she’s calling for equal opportunity for American women (years before the founding of the National Organization for Women), championing a more discerning standard of beauty that goes beyond plastic surgery’s quest for eternal youth, lauding the liberating force of rock and roll, or demanding free and unfettered speech on university campuses and beyond, Paglia can always be counted on to get to the heart of matters large and small. At once illuminating, witty, and inspiring, these essays are essential reading that affirm the power of men and women and what we can accomplish together.

CAMILLE PAGLIA is the University Professor of Humanities and Media Studies at the University of the Arts in Philadelphia. A regular contributor to Salon.com, she is the author of Glittering Images; Break, Blow, Burn; Vamps & Tramps; Sex, Art, and American Culture; and Sexual Personae.

“’One test of un homme sérieux,’ Christopher Hitchens wrote, ‘is that it is possible to learn from him even when one radically disagrees with him.’ By this measure, Camille Paglia is une femme sérieuse indeed. . . . If you’ve forgotten Sexual Personae, or have never read it, Paglia helpfully reprints a few chunks of it in her new essay collection, Free Women, Free Men: Sex, Gender, Feminism. These chunks are fiercely erudite, freewheeling and sex-drenched. . . . Her exegeses are prickly and acute, the Helen Vendler-meets-Patti Smith grad seminar you wanted but never quite got. . . . Her prose can be electric. . . . [Paglia is] a fearless public intellectual and more necessary than ever.”
—Dwight Garner, The New York Times

"Paglia is a brilliant thinker on culture and human nature. . . . [She] never fails to provide straightforward and thoughtful dialogue about gender. . . . [Her] new book is inspirational in its tone and its message that freedom belongs to both sexes."
—Helen Smith, The New Criterion

“Topics run the gamut, including an essay praising The Real Housewives; her famous 1990 piece on Madonna in which she deemed her ‘the future of feminism;’ and an astute essay analyzing the cultural, aesthetic, and historical implications of stilettos. An introductory essay offers a compelling glimpse into Paglia’s childhood in the 1950s that led her toward feminism and strong female role models like Amelia Earhart and Katharine Hepburn. . . . Her work is always thought provoking and laid out with an academic’s insight. She is most on point when she analyzes pop culture, design, and art—managing to put an intellectual spin on lowbrow entertainment and turn more obtuse academic topics into something relatable and enthralling.”
—Adrienne Urbanski, BUST

“Polemical, thought-provoking, enraging, funny, and brave. And today [Paglia’s essays] sound prescient. . . . Before President Donald Trump thrust the nation into debates about liberals forgetting white working class Americans in the Midwest and South, the failures of contemporary feminism, and free speech on college campus . . . Paglia was discussing all these topics. Whether you agree or disagree with Paglia (and many people have made strong arguments in disagreement), she has always understood the country while other experts did not."
—Mitchell Sunderland, VICE

“What this amounts to is a non-stop intellectual barrage. No one with the slightest interest in its issues can afford to overlook Paglia’s treatment of them here, which compels the consideration of her shrillest critic and ardent devotee alike. The wider significance of Free Men, Free Women is the promise, implicit in its approach, to help pave a path forward for those now reeling from the unintended consequences of the continuing culture wars.”
— Nick Goldberg, American Conservative

“[Paglia] is one of the most fascinating (and individualistic) writers on feminism and gender extant.”
—Jeff Simon, Buffalo News

“Feminist and culture critic Paglia is at her feisty, full-throated best in this series of short manifestos that spans her career from her breakthrough 1990 study, Sexual Personae, to the present. Paglia’s remedy for the ills besetting contemporary women is an infusion of her personal brand of ‘Amazonian feminism,’ which combines staunch libertarian principles with 1960s rebellion. She refuses to bow to ideology (‘The premier principles of this book are free thought and free speech—open, mobile, and unconstrained by either liberal or conservative ideology’) and is uncompromising in her convictions. Paglia’s sharp tongue and clear vision veer toward forceful assertions and snappy insults as often as practical perspective and common-sense solutions. . . . Her stances on date rape, abortion, free speech, sex, art, and the importance of historical perspective are admirably consistent, as is her contempt for university coddling, poststructuralism, women’s studies programs, cults of victimhood, and anything mainstream. . . . One does not have to agree with her theories about masculinity, femininity, and sex to enjoy Paglia’s bracing intellect and scrappy attitude.”
—Publishers Weekly

“Impressive. . . . [Paglia] uses new insight to dissect issues relating to feminism. . . . The author eloquently illustrates the dangers of narrowly defining a feminist according to what issues they support. Instead, she argues for feminism to become an umbrella of people with differing political views, sexual orientations, and religions who seek to strengthen women, without the need to demean men. Intriguing and thought provoking for readers interested in different perspectives of feminism.”
—Stacy Shaw, Library Journal
or support indie stores by buying on
Copyright © 2020 American Booksellers Association