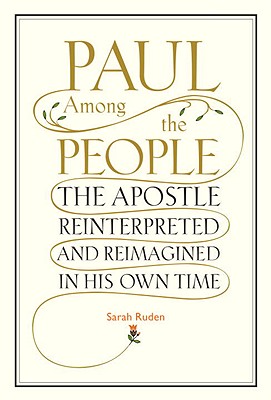 Paul Among the People

The Apostle Reinterpreted and Reimagined in His Own Time

It is a common—and fundamental—misconception that Paul told people how to live. Apart from forbidding certain abusive practices, he never gives any precise instructions for living. It would have violated his two main social principles: human freedom and dignity, and the need for people to love one another.

Paul was a Hellenistic Jew, originally named Saul, from the tribe of Benjamin, who made a living from tent making or leatherworking. He called himself the “Apostle to the Gentiles” and was the most important of the early Christian evangelists.

Paul is not easy to understand. The Greeks and Romans themselves probably misunderstood him or skimmed the surface of his arguments when he used terms such as “law” (referring to the complex system of Jewish religious law in which he himself was trained). But they did share a language—Greek—and a cosmopolitan urban culture, that of the Roman Empire. Paul considered evangelizing the Greeks and Romans to be his special mission.

“For you were called to freedom, brothers and sisters; only do not use your freedom as an opportunity for self-indulgence, but through love become slaves to one another. For the whole law is summed up in a single commandment, ‘You shall love your neighbor as yourself.’”

The idea of love as the only rule was current among Jewish thinkers of his time, but the idea of freedom being available to anyone was revolutionary.

Paul, regarded by Christians as the greatest interpreter of Jesus’ mission, was the first person to explain how Christ’s life and death fit into the larger scheme of salvation, from the creation of Adam to the end of time. Preaching spiritual equality and God’s infinite love, he crusaded for the Jewish Messiah to be accepted as the friend and deliverer of all humankind.

In Paul Among the People, Sarah Ruden explores the meanings of his words and shows how they might have affected readers in his own time and culture. She describes as well how his writings represented the new church as an alternative to old ways of thinking, feeling, and living.

Ruden translates passages from ancient Greek and Roman literature, from Aristophanes to Seneca, setting them beside famous and controversial passages of Paul and their key modern interpretations. She writes about Augustine; about George Bernard Shaw’s misguided notion of Paul as “the eternal enemy of Women”; and about the misuse of Paul in the English Puritan Richard Baxter’s strictures against “flesh-pleasing.” Ruden makes clear that Paul’s ethics, in contrast to later distortions, were humane, open, and responsible.

Paul Among the People is a remarkable work of scholarship, synthesis, and understanding; a revelation of the founder of Christianity.


Praise For Paul Among the People: The Apostle Reinterpreted and Reimagined in His Own Time…

Paul Among the People


“Sarah Ruden brings a unique perspective to the teachings of the apostle most responsible for spreading Christianity throughout the Greco-Roman world. As an accomplished translator of classical literature, Ruden offers a wholly fresh reinterpretation of Paul’s most controversial writings—on slavery, the role of women in the church, homosexuality, love—by examining them alongside the writings of the polytheistic culture of his day.”


“… a well-written, informative, interesting and thought-provoking book on the Apostle Paul.”


“Ruden is winningly intimate as well as impressively scholarly in this superb book.”


The Aeneid
“The best translation yet, certainly the best of our time.”
—Ursula K. Le Guin

“The first translation since Dryden’s that can be read as a great English poem in itself.”
—Garry Wills, The New York Review of Books

“An Aeneid more intimate in tone and soberer in measure than we are used to—a gift for which many will be grateful.”
—J. M. Coetzee

“An intimate rendering of great emotional force and purity . . . The immediacy, beauty, and timelessness of the original Latin masterpiece lifts off these pages with gemlike originality.”
—Choice

Lysistrata
“A perfect Lysistrata for the new millennium: rich apparatus and a sparkling, metrical, accurate translation of this inexhaustible treasure of a play.”
—Rachel Hadas, Rutgers University

Satyricon
“Ruden has caught, better than any translator known to me, both the conversational patterns of Petronian dialogue and the camera-sharp specificity and color of the Satyricon’s descriptive pages . . . A quite extraordinary achievement.”
—Peter Green, Los Angeles Book Review

“Relying on her excellent knowledge of Latin, her lively feel for contemporary slang and rhythm, and her infectious love of the work, Ruden gives us the full Satyricon . . . Her book, breathing knowledge and affection, is a delight.”
—Donald Lyons, The New Criterion

Sarah Ruden was educated at the University of Michigan, Johns Hopkins, and Harvard. She has translated four books of classical literature, among them "The Aeneid, " and is the author of "Other Places, " a book of poetry. She is a research fellow at Yale Divinity School in New Haven, Connecticut, where she lives.
Loading...
or
Not Currently Available for Direct Purchase