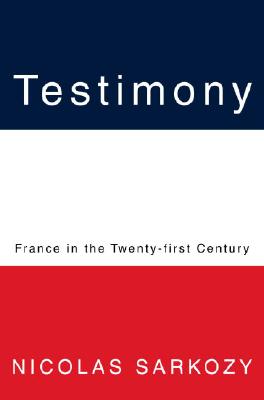 France in the Twenty-First Century

"This book presents my analysis of the difficulties France faces. It outlines my proposals for putting France back on the path toward economic growth, social justice, and modernity. And it addresses many of the common domestic, international, economic, and social challenges that advanced democracies like France and the United States must confront." So writes Nicolas Sarkozy-France's outspoken and controversial minister of the interior and a leading presidential candidate-in the new preface to the American edition of his best-selling memoir.
He analyzes the difficulties facing France-social tensions, inadequate education, high unemployment. But far from drawing fatalistic conclusions, he demonstrates that France does not suffer from an identity crisis but from a crisis of political debate. He accuses French political figures, sometimes harshly, of having deprived the public of their own say in government, leading to pervasive suspicion of elites, the state, and proper governance. This book is a testimony to how Nicolas Sarkozy has evolved over the past twenty years as the only French political figure across the entire spectrum to broaden public debate, to confront "idees recues, " to seek a new direction for France-in short to re-empower the French in their own political deliberations. In "Testimony, " for which he has drawn fire, Sarkozy issues a wake-up call to his people and the world, setting forth his iconoclastic views on such hot-button issues as international relations vis-a-vis the United States, the Arab world, and Africa; globalization; cultural chauvinism; immigration; the welfare state; education; and law and order.
Extraordinary for its candor regarding Sarkozy's political as well as personal life, "Testimony" gives us an unsparing critique of contemporary French society and its leaders even as it champions a sharp break with the past. Sarkozy's is a brave, new vision for France as it engages the world of the twenty-first century.
or
Not Currently Available for Direct Purchase
Copyright © 2020 American Booksellers Association