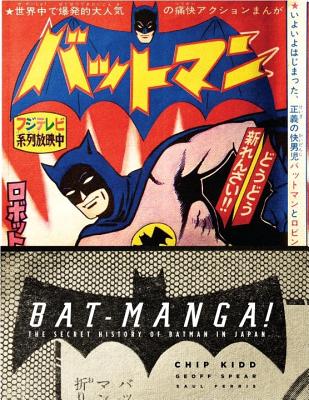 The Secret History of Batman in Japan (Pantheon Graphic Library)

The two hottest genres in comics gleefully collide head-on, as the most beloved American superhero gets the coolest Japanese manga makeover ever.

In 1966, during the height of the first Batman craze, a weekly Japanese manga anthology for boys, Shonen King, licensed the rights to commission its own Batman and Robin stories. A year later, the stories stopped. They were never collected in Japan, and never translated into English. Now, in this gorgeously produced book, hundreds of pages of Batman-manga comics more than four decades old are translated for the first time, appearing alongside stunning photographs of the world’s most comprehensive collection of vintage Japanese Batman toys.

This is The Dynamic Duo as you’ve never seen them: with a distinctly Japanese, atomic-age twist as they battle aliens, mutated dinosaurs, and villains who won’t stay dead. And as a bonus: Jiro Kuwata, the manga master who originally wrote and drew this material, has given an exclusive interview for our book.

The deluxe, expanded, and limited hardcover edition has a distinctly different cover, full-color printed endpapers, and an amazing extra adventure written by Jiro Kuwata (not included in the paperback), about a band of rogue alien robot art thieves at large in Gotham City. Guess who gets called in to save the day....

More than just a dazzling novelty, Bat-Manga! is an invaluable, long-lost chapter in the history of one of the most beloved and timeless figures in comics.

Chip Kidd is a graphic designer and writer in New York City. His two previous books about comics for Pantheon were Peanuts: The Art of Charles M. Schulz and Mythology: The DC Comics Art of Alex Ross. Both won the Eisner Award and were national bestsellers.

Geoff Spear is a photographer, living and working in lower Manhattan. For over two decades he has shot hundreds of images for a wide range of book covers, by such authors as Haruki Murakami, John Burdett, Augusten Burroughs, Oliver Sacks and Daniel Gilbert, among many others.

Saul Ferris is a founding partner in the law office of Ferris, Thompson and Zweig, in Gurnee, Illinois. During the last twenty years, he has amassed the most comprehensive collection of vintage Japanese Batman toys and memorabilia in the world.
or
Not Currently Available for Direct Purchase
Copyright © 2020 American Booksellers Association