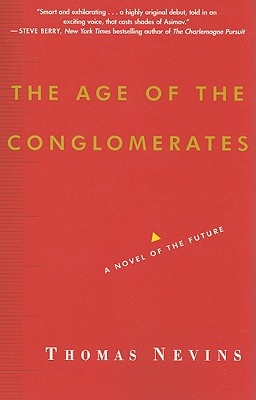 The Age of the Conglomerates

A Novel of the Future

“In a country dominated by corporations, genetic engineering has become the norm. The aged, known as 'The Coots,' are sent off to camps to wither away. Anyone breaking from the accepted societal norms (particularly children) can become a Dyscard: yanked from their family and dumped into the underground to fend for themselves or die. The story begins with respected doctor Christine Salter, whose hidden passion for a colleague inadvertently launches a revolution.”
— Geoffrey B. Jennings, Rainy Day Books, Fairway, KS
View the List

Now that they are in power, there are no more checks and balances. The Conglomerates, and their mysterious party chairman, have taken over everything and everyone. There is no one left to stop them.

Forty years in the future, in a world where Big Brother runs amok, a powerful political party known as the Conglomerates has emerged, vowing to enforce economic martial law at any cost. Dr. Christine Salter, director of genetic development at a New York medical center, is in charge of “genetic contouring,” the much-in-demand science of producing the ideal child. But Christine is increasingly troubled by odd events, including the strange disappearance of Gabriel Cruz, a co-worker for whom she has a developing affection, and the fact that her latest assignment–making the Conglomerate chairman more youthful through genetic engineering–is an especially dangerous task.

As mandated by the Family Relief Act, Christine’s grandparents are relocated to a government-designed community in the American Southwest, along with other Coots (the official term given to the elderly), who are considered an economic and social burden to family and society. But even in this cold, cruel age, the Conglomerates can only control so much.

In his enthralling debut, Thomas Nevins thrillingly chronicles a brave new world where one family struggles to survive by keeping alive feelings of mercy, loyalty, and love.

Praise for The Age of the Conglomerates:

Thomas Nevins has been involved in the book business for most of his life, and is currently employed as a sales representative for Random House. He lives with his family in Brooklyn, New York.
Loading...
or
Not Currently Available for Direct Purchase