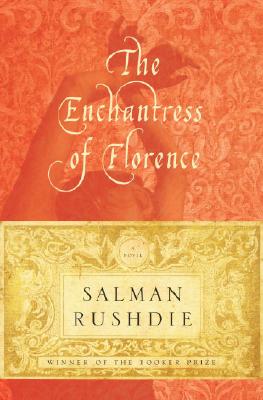 A tall, yellow-haired, young European traveler calling himself “Mogor dell’Amore,” the Mughal of Love, arrives at the court of the Emperor Akbar, lord of the great Mughal empire, with a tale to tell that begins to obsess the imperial capital, a tale about a mysterious woman, a great beauty believed to possess powers of enchantment and sorcery, and her impossible journey to the far-off city of Florence.

The Enchantress of Florence
is the story of a woman attempting to command her own destiny in a man’s world. It is the story of two cities, unknown to each other, at the height of their powers–the hedonistic Mughal capital, in which the brilliant Akbar the Great wrestles daily with questions of belief, desire, and the treachery of his sons, and the equally sensual city of Florence during the High Renaissance, where Niccolò Machiavelli takes a starring role as he learns, the hard way, about the true brutality of power.

Vivid, gripping, irreverent, bawdy, profoundly moving, and completely absorbing, The Enchantress of Florence is a dazzling book full of wonders by one of the world’s most important living writers.


Praise For The Enchantress of Florence…

Salman Rushdie is the author of nine previous novels: "Grimus; Midnight's Children "(which was awarded the Booker Prize in 1981 and, in 1993, was judged to be the "Booker of Bookers," the best novel to have won that prize in its first twenty-five years); "Shame" (winner of the French Prix de Meilleur Livre Etranger); "The Satanic Verses" (winner of the Whitbread Prize for Best Novel); "Haroun and the Sea of Stories "(winner of the Writers Guild Award); "The Moor's Last Sigh "(winner of the Whitbread Prize for Best Novel); "The Ground Beneath Her Feet "(winner of the Eurasian section of the Commonwealth Prize); "Fury" (a New York Times Notable Book); and "Shalimar the Clown "(a Time Book of the Year). He is also the author of a book of stories, "East, West," and three works of nonfiction- "Imaginary Homelands, The Jaguar Smile," and "The Wizard of Oz." He is co-editor of "Mirrorwork," an anthology of contemporary Indian writing.
Loading...
or
Not Currently Available for Direct Purchase