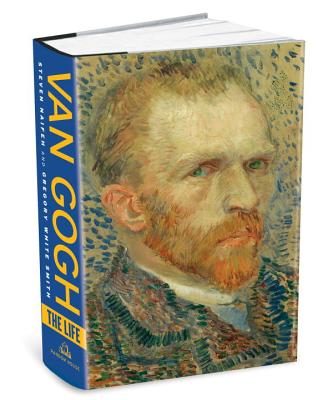 Working with the full cooperation of the Van Gogh Museum in Amsterdam, Naifeh and Smith have accessed a wealth of previously untapped materials. While drawing liberally from the artist’s famously eloquent letters, they have also delved into hundreds of unpublished family correspondences, illuminating with poignancy the wanderings of Van Gogh’s troubled, restless soul. Naifeh and Smith bring a crucial understanding to the larger-than-life mythology of this great artist—his early struggles to find his place in the world; his intense relationship with his brother Theo; his impetus for turning to brush and canvas; and his move to Provence, where in a brief burst of incandescent productivity he painted some of the best-loved works in Western art.

The authors also shed new light on many unexplored aspects of Van Gogh’s inner world: his deep immersion in literature and art; his erratic and tumultuous romantic life; and his bouts of depression and mental illness.

Though countless books have been written about Van Gogh, and though the broad outlines of his tragedy have long inhabited popular culture, no serious, ambitious examination of his life has been attempted in more than seventy years. Naifeh and Smith have re-created Van Gogh’s life with an astounding vividness and psychological acuity that bring a completely new and sympathetic understanding to this unique artistic genius whose signature images of sunflowers and starry nights have won a permanent place in the human imagination.


Praise For Van Gogh: The Life…

“The definitive biography for decades to come.”—Leo Jansen, curator, the Van Gogh Museum, and co-editor of Vincent van Gogh: The Complete Letters

“In their magisterial new biography, Van Gogh: The Life, Steven Naifeh and Gregory White Smith provide a guided tour through the personal world and work of that Dutch painter, shining a bright light on the evolution of his art. . . . What [the authors] capture so powerfully is Van Gogh’s extraordinary will to learn, to persevere against the odds.”—Michiko Kakutani, The New York Times

“Captivating . . . Winners of the 1991 Pulitzer Prize for their biography of Jackson Pollock, [Naifeh and Smith] bring a booming authorial voice and boundless ingenuity to the task and have written a thoroughly engaging account of the Dutch painter. Drawing on Van Gogh’s almost uniquely rich correspondence . . . the authors vividly reconstruct the intertwined stories of his life and his art, portraying him as a ‘victim of his own fanatic heart.’ . . . Their fine book has the potential not only to reinvigorate the broad base of popular interest that Van Gogh already enjoys but to introduce a whole new generation to one of art history’s most remarkable creative spirits.”—Jonathan Lopez, The Wall Street Journal

“Could very well be the definitive biography . . . In it we get a much fuller view of Van Gogh, owing to the decade Naifeh and Smith spent on research to create this scholarly and spellbinding work. . . . How pleased we should be that [these authors] have rendered so exquisitely and respectfully Van Gogh’s short, intense, and wholly interesting life.”—Roberta Silman, The Boston Globe

“This generation’s definitive portrait of the great Dutch post-Impressionist . . . [The authors’] most important achievement is to produce a reckoning with Van Gogh’s occasional ‘madness’ that doesn’t lose sight of the lucidity and intelligence—the profound sanity—of his art.”—Richard Lacayo, Time

“Brilliant . . . Steven Naifeh and Gregory White Smith are the big-game hunters of modern art history. . . . [Van Gogh] rushes along on a tide of research. . . . At once a model of scholarship and an emotive, pacy chunk of hagiography.”—Martin Herbert, The Daily Telegraph (London)

Steven Naifeh and Gregory White Smith are graduates of Harvard Law School. Mr. Naifeh, who has written for art periodicals and has lectured at numerous museums including the National Gallery of Art, studied art history at Princeton and did his graduate work at the Fogg Art Museum of Harvard University. Together they have written many books on art and other subjects, including four "New York Times" bestsellers. Their biography "Jackson Pollock: An American Saga" won the Pulitzer Prize and was a finalist for the National Book Award. It also inspired the Academy Award winning 2000 film "Pollock" starring Ed Harris and Marcia Gay Harden as well as John Updike s novel, "Seek My Face." Naifeh and Smith have been profiled in "The New Yorker, The New York Times, USA Today, "and" People, "and have appeared on "60 Minutes, The Oprah Winfrey Show, Larry King Live, Charlie Rose, "and the "Today" show."
Loading...
or
Not Currently Available for Direct Purchase